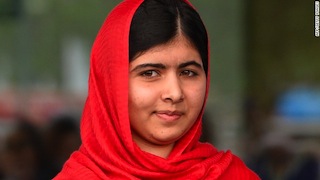 The 17-year-old Pakistani girl, who will be given the prize in a ceremony in Oslo, became a global icon after she was shot and nearly killed by the Taliban for insisting that girls had a right to an education.

Satyarthi, 60, is recognised for a 35-year battle to free thousands of children from virtual slave labour.

Malala has already been honoured with a host of awards, standing ovations and plaudits everywhere from the United Nations to Buckingham Palace.

But on the eve of the ceremony she said she would not rest on her laurels, saying she would like one day to become prime minister in her native Pakistan.

“If I can serve my country best through politics and through becoming a prime minister then I would definitely choose that,” she told the BBC.

At a press conference Tuesday in Oslo, Malala said that in many parts of the world, children’s requirements are infinitely more modest than an “iPad or computer.”

“What they are asking for is just a book, just a pen, so why can’t we do that?”

Malala was 15 when a Taliban gunman shot her in the head as she travelled on a school bus in response to her campaign for girls’ education.

Although she almost died, she recovered after being flown for extensive surgery in Birmingham, central England.

She has been based in the city with her family ever since, continuing both her education and activism.

For the first time ever the blood-soaked school uniform she wore when she was shot near her home in the Swat Valley in October 2012 will go on display at the Nobel Peace Center in Oslo this week.

Asked why she thinks some Islamic extremist groups are so opposed to education for girls, Malala, dressed in a multi-coloured headscarf, replied: “Unfortunately, those people who stand against education, they sometimes themselves are uneducated or they’ve been indoctrinated”.

The pairing of Malala and Satyarthi had the extra symbolism of linking neighbouring countries that have been in conflict for decades.

After she was named as the winner, Malala said she wanted both states’ prime ministers to attend the prize-giving ceremony in Oslo.

“If the prime ministers had come here I would have been very happy,” she said. “I would have thought of it as a big opportunity to ask them … to make education their top priority and work on it together because we see the number of children who are out of school and suffering from child labour are mostly in India and Pakistan.”

While Malala will be the star of the annual Nobels extravaganza — also featuring the literature prize winner, Frenchman Patrick Modiano, and his compatriot Jean Tirole with the economics award — her peace prize co-winner Satyarthi is less high-profile.

He welcomed the increased attention the Nobel brought to the cause of children in bonded labour.

“There are children who are bought and sold like animals,” the jovial 60-year-old, clad in traditional Indian dress, told reporters at the Nobel Institute.

Satyarthi’s organisation Bachpan Bachao Andolan (Movement to Save Childhood) prides itself on liberating more than 80,000 children from bonded labour in factories and workshops across India and has networks of activists in more than 100 countries.

According to the International Labour Organisation (ILO) there are about 168 million child labourers globally.