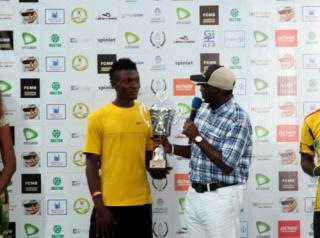 Winner of the recently concluded Lagos Governor’s Cup Lagos Tennis Championship, Moses Michael and Christian Paul who are taking part in the Togo Open-ITF Pro Circuit in Lome, have qualified for the quarterfinal stage of the Men’s Doubles event, P.M. News Sports can authoritatively report.

The Nigerians, who missed the Dala Hard Court Tourney to participate in the ATP tour, defeated the pair of Ivo Klec from Slovakia and Karim Kadry from Egypt, 4-6, 6-1, 10-5 in the first round of the event.

They will now take on number three seed twin pair of Javier Pulgar-Garcia and Jaime Pulgar-Garcia from Spain in the quarterfinal match which will be decided later today.

The Abuja-based duo were not as lucky in their Men’s Singles matches, as they were bundled out in the first round, but not without putting up a fight.
Michael lost 6-4, 7-5 to Seydou Diallo from Mali, while Paul was massive in his 7-6(5), 5-7, 6-3 loss to Spaniard, Aaron Cortes Alcaraz.

President, Nigeria Tennis Federation, NTF, Engr. Sani Ndanusa, believes it is a right step in the right direction for the youngsters.

The erstwhile Nigeria Olympic Committee, NOC President described the players’ growth as a good development for the country’s tennis adding that the exposure would be invaluable at the end of the competition.

“Moses Michael’s steady rise is as a result of his consistency. We all saw what he did during the Governor’s Cup Championship, where he surprised many of us.

“Christian (Paul) is another player who is doing well, especially as he started from the juniors and has been stepping up his game since he moved to the seniors. I believe that they will get better after participating in the tournament.

“We also hope that the exposure from Togo will help them in subsequent tournaments. I am really proud of those players and I can assure Nigerians that we shall see them at the top on the Circuit in the nearest future,” he told our correspondent.

The ongoing Pro Circuit which started on Monday, 8 December, and has Nigeria’s Seidu Musa as one of its umpires, will end on Sunday, 14 December in Lome, Togo.