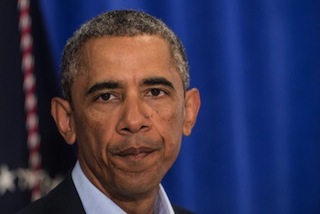 Beleaguered studio Sony Pictures apologized Thursday for racially insensitive remarks about President Barack Obama in company emails, the latest in a series of leaks that have left Hollywood reeling.

The unflattering leaks — including a producer labeling Angelina Jolie a “minimally talented spoiled brat” — have thrown Sony into damage control mode, amid few signs they are going to stop any time soon.

Other revelations have included the salaries of top executives and stars, unpublished scripts and the aliases used by some celebrities to lay low when they check into hotels. Sony Pictures Entertainment is battling to contain the fallout from a massive hacking attack which some have blamed on North Korea, angry at a forthcoming movie which lampoons the reclusive state’s leader.

The latest leaks reportedly include an email exchange in which Sony co-chairwoman Amy Pascal asks film producer Scott Rudin what she should ask Obama at a “stupid” fundraising breakfast.

“Would he like to finance some movies?” joked Rudin, to which Pascal reoplied: “I doubt it. Should I ask him if he liked DJANGO?” — a reference to Quentin Tarantino slave movie “Django Unchained.”

Pascal retorted: “Or the Butler” — Lee Daniels’ “The Butler,” about a black butler who serves generations of presidents at the White House.

Pascal apologized for her remarks Thursday, saying: “The content of my emails were insensitive and inappropriate but are not an accurate reflection of who I am.

“Although this was a private communication that was stolen, I accept full responsibility for what I wrote and apologize to everyone who was offended,” she added in a statement cited by Variety.

Rudin — who did not reply to a request for comment — was also behind the scathing comments about Jolie and a planned movie about Cleopatra, with Jolie in the title role.

“I’m not destroying my career over a minimally talented spoiled brat who thought nothing of shoving this off her plate for 18 months so she could go direct a movie,” Rudin wrote.

“She’s a camp event and a celebrity … There is NO relationship with any movie star … that requires our willingness to prostrate ourselves this way in the face of childish, irresponsible, willful and un-partnerly behavior.”

The emails, published by online sites including gawker.com, were leaked as part of a huge hacking attack on Sony Pictures over the last few weeks.

Earlier this week, a group which claims to have hacked Sony’s servers demanded its movie studio pull a soon-to-be-released comedy depicting a fictional CIA plot to kill North Korea’s leader.

North Korea Sunday denied involvement in the brazen cyber attack on Sony Pictures, but praised it as a “righteous deed” potentially orchestrated by supporters furious over the movie “The Interview,” due out on Christmas Day.

In a sign of nerves about the film, Sony barred TV cameras and print reporters from a red carpet premiere of “The Interview” in Los Angeles on Thursday.

The movie is scheduled for release on December 25. Experts say the furor surrounding it will likely help at the box office.

It “will definitely stir up interest as people will want to see what all the fuss is about,” he added.