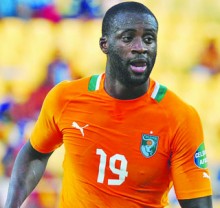 A new chapter will be written in the history of African football irrespective of the winner of the 2014 African Player of the Year.

There is a historical background surrounding each of the contenders; Gabonese forward, Pierre-Emerick Aubameyang, Nigeria goalie Vincent Enyeama and Ivorian midfielder Yaya Toure.

The trio has had a stellar year at both national and club level making the contest one too close to call. Each stands an equal chance of being crowned the African Player of the Year.

Toure, winner for the past three editions, faces a tough test from Aubameyang and Enyeama, in his quest for an unprecedented fourth successive crown.

Ex-Cameroon star, Samuel Eto’o remains the only person to have won the prize four times – 2003, 2004, 2005 and 2010. The Ivorian is not only seeking to equal the feat of the England-based forward, but also become the first player to win the topmost individual honour in African football four times in a row.

Aubameyang and Enyeama also have their pieces of record to make. For the former, he will be the first Gabonese to have laid his hands on the prestigious crown since its inception in 1992.

With the record of the first goalkeeper to win the award hovering around his head, Enyeama will also be the first Nigerian since 1999 to claim the most sought after individual prize in African football. Legendary forward Nwankwo Kanu was last Nigerian to be decorated in 1999, three years after his initial coronation. Other Nigerian winners are Rashidi Yekini (1993), Emmanuel Amunike (1994) and Victor Ikpeba (1997).

Toure, however, looks good to win the award back to back for the fourth time. He was pivotal as Manchester City won the English Premier League, featured at the World Cup even if Ivory Coast disappointed, and helped his country reach this month‘s Africa Cup of Nations finals. Toure has made himself the heartbeat of the Manchester City team challenging for the English title and the Champions League.

He is also the main inspiration for Ivory Coast following the retirement from international football of Didier Drogba.

The votes of the 54 national coaches in Africa and their technical directors will decide the winner.

The 180-minutes show to honour Africa’s finest football personalities will be fused with music to blend the celebration of football excellence with the best of entertainment in Lagos tonight.

Set to thrill on the night is Africa’s sensational pop twins, P-Square. The identical twin brothers will entertain the crowd with their numerous hits and highly captivating dance moves.

The masked one and Afro-Calypso originator, Lagbaja, will also perform on the night.

“Shake,” and “Ada Ada” crooner, Flavour, the prolific Nigerian recording artiste, dancer, songwriter, and performer will also add his signature splendour to the night just as ASEM from Ghana.

Other top acts expected to do their stuff at the high octane continental event are DR Congo’s multiple award-winning song writer, singer and guitarist, Fally Ipupa; global Jazz icon, Hugh Masekela from South Africa and Egyptian folk singer and the first person from an Arab country to perform at a Nobel Prize ceremony, Hakim.

The rest billed to perform at the show, which will be watched live all over the world, include the Soweto Gospel Choir from South Africa, sensational singing group, Uhuru; pan African group, Cirque D’Afrique and Tanzania’s prominent multiple award-winning singer, Diamond.