Jonathan will win in the South-West, says PDP governors 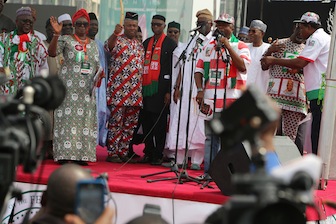 Governor Ayodele Fayose of Ekiti state on Thursday assured President Goodluck Jonathan of massive support in the South-West ahead of the February 14 presidential election.

Fayose said during the kick-off of the Peoples Democratic Party (PDP) presidential campaign in Lagos that the party would win convincingly in all elections in the South West in the February polls.

The governor appreciated efforts of President Jonathan at impacting positively on the lives of Nigerians and said he was confident that the PDP would triumph in the election.

“President Jonathan is a leader that has the people’s interest in his mind. I believe and I am sure that the President will win, come February,” he said.

Also speaking, Governor Olusegun Mimiko of Ondo State said that Jonathan is the right President for Nigeria. Mimiko, who is the South-West Chairman of Goodluck Jonathan Campaign Organisation, described Jonathan as a democrat.

“The President is a democrat in words and in deeds. A believer in the rule of Law, a leader who is genuinely, humble, kind, accommodating, transparent and tolerant.

“A leader, who in spite of challenges, has remained cool, calm and level headed. We thank Mr President that in spite of being the most abused and negatively profiled President in the history of this country, he has refused to roll out obnoxious laws.

“The President has touched the lives of Nigerians both high and low,” he said.

Mimiko said that Jonathan was capable of piloting of the affairs of Nigeria.

He commended the President for the programmes his administration initiated in the South-West and urged Nigerians to vote for him.

Governor Godswill Akpabio of Akwa Ibom also assured the President of massive votes in the South-South during the February polls.

Akpabio urged the citizens to support the developmental agenda of the President for the country.

Governor Bangida Aliyu of Niger, in his contribution, urged Nigerians to vote for PDP and shun any form of violence during and after the elections.

“We are not afraid of propaganda; we base our arguments on developments.

George said the February 14 presidential election would be decisive and urged Nigerians not to allow media propaganda to mislead them.

He urged them to vote for President Jonathan.

NAN reports that some Nollywood actors and actresses were at the event to show their support for the President’s re-election bid.