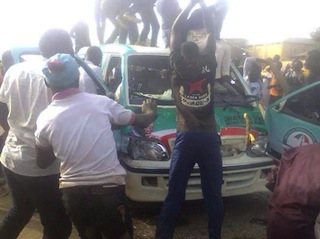 The attack occurred as PDP supporters in the state converged at the Hiapang Airport to receive the gubernatorial candidate of the party, Gyang Pwajok, who was returning from Lagos after receiving his flag last Thursday.

A witness, whose car was also burnt by the rampaging youths, said another PDP-branded car was also set alight.

The source, who only identified herself as Mrs. Rose, told PREMIUM TIMES that her Honda car was also smashed by the protesting youth.

She said the road leading to the area was blocked by the rampaging youth, as they bashed other vehicles plying the route.

According to her, the incident occurred in the presence of members of the Special Taskforce on Jos crisis STF, who could not foil the action of the youth.

The incident has generated tension within Jos as residents rushed home for safety.

The reason for the attack is unknown as at the time of filing this report.