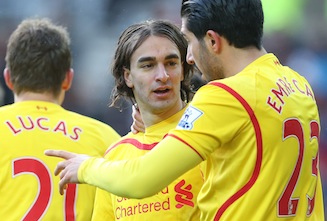 Lazar Markovic scored the only goal as improving Liverpool provisionally closed to within four points of the Premier League’s top four by winning 1-0 at Sunderland on Saturday.

Gus Poyet’s Sunderland, who had Liam Bridcutt sent off for two bookable offences, remain three points above the relegation zone with only one win from their last 11 games.

“Our confidence is returning,” Liverpool manager Brendan Rodgers told BT Sport. “This is a team that gets better and better as it goes on. It is a young group, but they are developing very well.”

Having earlier seen a penalty appeal waved away after tumbling under a challenge from Wes Brown, Markovic put Liverpool ahead when he gathered a pass from Fabio Borini and prodded the ball between Costel Pantilimon’s legs.

Markovic then hit the bar with a spectacular, improvised scissors kick as Liverpool dominated, while former Sunderland loanee Borini rounded Pantilimon, only to find the side-netting.

The visitors lost Steven Gerrard at half-time after he sustained a knock, with Dejan Lovren coming on, but their position was strengthened in the 49th minute when Bridcutt was shown a second yellow card for impeding Emre Can.

Moments later, Adam Johnson left the Liverpool crossbar shuddering with a swerving drive from distance, but Rodgers’s side finished strongly, with Pantilimon saving from substitute Mario Balotelli and Philippe Coutinho.

Co-leaders Chelsea and Manchester City are both in action later on Saturday, with Chelsea hosting managerless Newcastle United and City visiting out-of-form Everton.

Tottenham Hotspur can move into the top four if they win at Crystal Palace, with third-place Manchester United and fourth-place Southampton facing off at Old Trafford on Sunday.