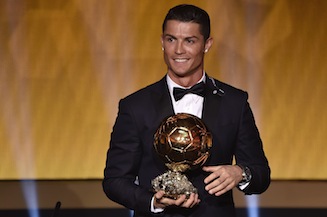 Portuguese and Real Madrid great Cristiano Ronaldo won his third Ballon d’Or on Monday at the FIFA ceremony in Zurich.

Ronaldo was the star of the night in which Real teammate James Rodriguez won the goal of the year award and Germany’s Joachim Loew was declared coach of the year.

“I never thought I would win this trophy on three occasions,” Ronaldo said in his victory speech, signalling there would be no letup in his quest for football glory.

“I want to be one of the greatest players of all time and of course this requires a lot of effort,” added the Portuguese striker who also won the award in 2013 and in 2008.

Ronaldo led Real Madrid to their 10th European Champions League crown in sensational style in 2014, smashing Messi’s record of 15 Champions League goals in a single season with 17 in just 11 appearances.