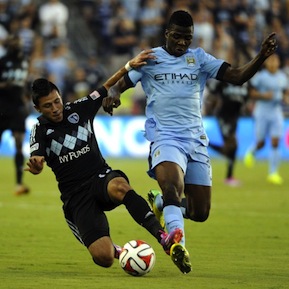 Nigeria’s under-20 male football team said on Tuesday that it will be without two of its overseas-based players as it seek to win the African Youth Championship (AYC) this year.

In a statement by the team’s Media Officer, Samm Audu, the Flying Eagles said English Premier League champions Manchester City have sent words to the Nigeria Football Association (NFA) on this.

“The club said they would not release Kelechi Iheanacho and Chidiebere Nwakali for the 2015 AYC in March in Senegal,” it said.

NAN reports that both players were among nine foreign-based players called up by the Flying Eagles for the AYC.

They were given a Thursday deadline to join up with the Flying Eagles in their training camp in Kaduna.

But in a mail signed by City’s scouting and recruitment operations manager, Fergal Harkin, the EPL side said Iheanacho was injured and might not be fit till mid-March.

The mail also indicated that Nwakali was about to be loaned out to a club in Europe.

“With regards to Iheanacho, he is currently injured. We believe he will be fit around the middle of March but can keep in contract regarding his recovery.

“As for Nwakali, we are currently in the process of agreeing his loan deal to Europe and he will not be available to meet up with the national team until further notice.

“At this moment in time, we feel it is best for his development that he cements his place in the clubside,” the club said in the mail.