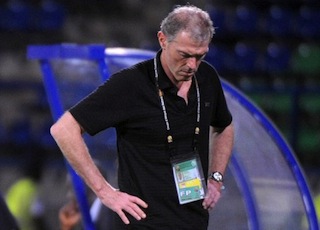 There was frustration for Michel Dussuyer and his Guinea team after a 1-1 draw with the Ivory Coast in Africa Cup of Nations Group D on Tuesday.

“In the end we’re a bit frustrated because we let the game go at a time when we were in control of events,” said Dussuyer, whose unfancied team took the lead through Mohamed Yattara and were a man to the good after Gervinho was sent off just before the hour mark.

However, Seydou Doumbia struck to earn the Elephants a point, with the draw leaving neither team fully satisfied at the finish.

“The sending-off of Gervinho gave us a chance to go all the way and then we got caught out in a move right through the middle,” Dussuyer continued.

“We didn’t turn the screw. A draw with the Ivory Coast remains a good result. We deserved to open the scoring and that set us on the way, and in the end we maybe just lacked a bit of experience.

“We’re frustrated but it is a good result against a great team for whom we have great respect.”

Stand-in captain Ibrahima Traore, who lashed a shot against the bar when Guinea were 1-0 up and was named man of the match, expressed the same feeling as his coach.

“It is nice to get the (man-of-the-match) award, but as the coach says there is a sentiment of frustration because we had the game under control and at that moment we conceded.

“We know we could have done more and won the game.”