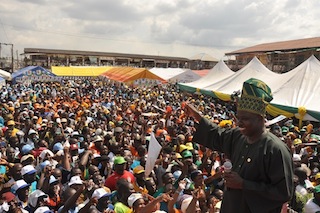 *Reveals that Project is back on course

Governor Ibikunke Amosun of Ogun State, southwest Nigeria has said that the people of Ode-Omi, site of the proposed Olokola Liquified Natural Gas (OKLNG) project in Ogun Waterside local government area of the State deserved compensation for their land.

Amosun blamed the Gbenga Daniel administration for not putting the community into consideration during negotiation and planning for the project.

In Amosun’s view, such an omission “was unfair and a sign of insensitivity to the plight of the host community.”

The governor stated this Wednesday while addressing the people of Ode- Omi during his re-election campaign tour of the area.

He assured that such injustice would be looked into when the project finally takes off.

The governor, who arrived the riverine community after an hour journey on the high sea with his team, lamented that the people have the right for adequate compensation, “but, we found nothing of such for you people when we came about three and half years ago.

“We asked them, but we were shocked that not even five per cent was provided for you the land owners in the project. But, we are taking a holistic review of the whole project and we shall give you what rightly belongs to you.

“Contrary to what they have come to tell you that you have been neglected, let us ask them that what did they do for you during their eight years in government. You have discovered that we have started the road link through Epe (in Lagos State). They say it is the company that is coming here, that is doing it. Why did the company not embark on it when they were in government? Amosun queried.

The governor emphasised that the OKLNG is a global project, in which international companies would also provide support and services.

“And you know these people, any sign of insincerity and inconsistency will put them off, that was what happened. We thanked God that they are coming back and regaining the trust for us,” Amosun stated.

He also canvassed for votes for the All Progressives Congress,APC Presidential candidate, General Muhammadu Buhari, noting that, “with APC government at the centre, more goodies and support will come to Ogun State and in particular for this OKNLG project here.”

The governor appealed for continued support for his administration, stressing, “we cannot forget you. We keep to promise we made to you,we are bringing international tourist site here, which will also provide employment for our youth here, just be patient and give us your support.”

Amosun seized the opportunity to eulogise and recognise the support of the All Progressives Congress,APC Senatorial candidate for Ogun East, Prince Dapo Abiodun, who facilitated the rehabilitation of the electrification project to the entire council area to the tune of N500 million.

He assured that the project would be completed within the stipulated one month grace,as promised by the candidate, urging the people to reciprocate the gesture with their votes for the party during next month’s general elections.