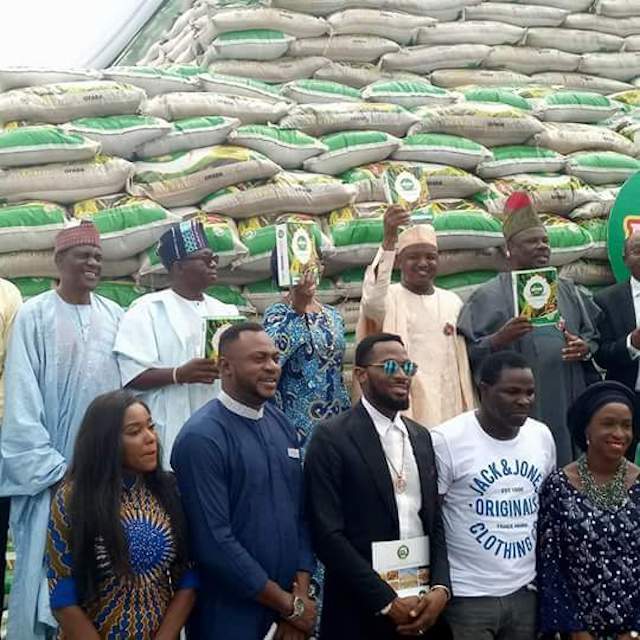 Governor Amosun, right and his guests during the launch of Mitros Rice in December 2017. Now he has been reported to the EFCC over an alleged mismanagement of N4b loan for the rice

Governor Ibikunle Amosun of Ogun state has been reported to the Economic and Financial Crimes Commission(EFCC) over an alleged mismanagement of a N4billion Anchors Borrowers Fund for rice farmers.

The petitioner, Nelson Ekunjumi, National Co-Ordinator for the Committee for the Protection of Peoples Mandate, based in Ikeja, Lagos, submitted a petition to the EFCC in Abuja on 28 February, urging the anti-graft agency to probe what the money was used for as ‘there is no rice plantation’ any where in Ogun.

“Two years ago, the Ogun State Government secured a N4 billion facility from the Central Bank of Nigeria (CBN), to help Ogun farmers in boosting production of rice, via aggressive rice farming in the State. The core of the plan and purpose of the fund was to also use the facility to establish rice plantations in Ogun State and provide jobs for at least ten thousand youth.

“On an inspection visit to the the State early last year by the Governor of CBN, Governor Amosun set up fake rice pyramids in Ogun State to give impression of massive output from the rice plantations. This was well reported in the mass media.

“The governor also announced at the ceremony that rice plantations would be established in different parts of Ogun State including Ijebu North East and Ogun Waterside Local Government Areas.

“After that photo-trick ceremony, nothing has been heard of Mitros Rice and there is no rice plantation established with the Anchor Borrowers Fund anywhere in Ogun State.

“We urge your agency to quickly intervene without further delay. The huge sum of money involved would have gone a long way in bettering the lives of Ogun farmers, while providing jobs for our teeming unemployed youth.

“Please treat as urgent sir, as we see such action as contradictory to the good intention of President Muhammadu Buhari to stop the importation of rice to Nigeria.”

Governor Amosun is yet to respond to the petition.

Amosun launched the Mitros(acronym for Mission to Rebuild Ogun State) rice in December 2017. About 110,000 bags of the rice were arranged in a pyramid, with the launch done with fanfare. The ceremony was attended by the governor of the Central Bank of Nigeria, Godwin Emefiele and Governor of Kebbi state, who is also the chairman, Presidential Task Force on Rice and Wheat Production. There were also musicians and Nollywood stars in attendance.

Some cynics at the time derided it as a political deceit.

But Amosun dismissed the critics as political detractors.
His commissioner for agriculture, Peju Adebajo said the government was promoting the production of Ofada brand of rice, native to the state.

Amosun in his address at the launch said the production of MITROS RICE will go a long way in making Ofada rice available, at affordable price, for the people’s consumption.

“The new Ofada rice will be produced in a hygienic manner, and to high standards; and it will enjoy standardised packaging – in 1kg, 5kg,10kg, 25kg and 50kg bags – and bear the MITROS stamp of quality, signifying goods produced to the highest standards”, he said.