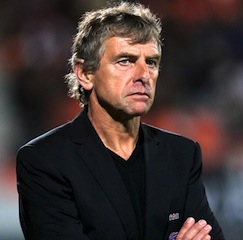 Algeria’s tactician, Christian Gourcuff has declared that his team won’t underrate the Ghana’s Black Stars when both sides meet today in the second group match of the Africa Cup of Nations (AFCON) in Equatorial Guinea.

Having lost their opening game at the Africa Cup of Nations this year, the Black Stars of Ghana cannot be described as having put in the performance most fans expected of them in these early stages of the tournament. However, in Asamoah Gyan’s absence, the Stars have another talisman in their stand-in captain Andrew Ayew who can ensure the former’s absence is not too much of a blow. During their tough encounter against Algeria, Ayew is certainly the man Ghana will expect to step up and make the difference.

No one is more aware of this than Algeria’s coach, Gourcuff, who knows Ayew well having managed the prodigious attacker at FC Lorient. Gourcuff shared his thoughts on the game, Ghana and Ayew.

“I am familiar with Ayew, because I brought him to Lorient and everybody knows that,” said the Frenchman.

“I have not yet seen Ghana, but it’s a team of experienced players. They are less unbridled than South Africa which should suit us.”

“They have quality players like their captain Andre Ayew whom I know very well in Lorient and as everyone knows, he has lots of qualities and capable of making the difference.”

“We are not going to underestimate our opponents. Our objective remains the three points against Ghana to ensure qualification as soon as possible because it will be very difficult against Senegal a few days later.”

Meanwhile, Bafana Bafana will need nothing other than all three points when they face Senegal in their AFCON tie Friday evening at the Estadio de Mongomo kicks-off at 21h00 CAT.

Shakes Mashaba’s men will be desperate to grab all three points against the Lions of Teranga following what was a disappointing 3-1 loss to Algeria.

Senegal will be high on confidence having secured a last gasp winner to earn a 2-1 victory over Ghana in their opening game in Equatorial Guinea.

Bafana Bafana winger Thuso Phala is positive South Africa can climb out of the hole they find themselves in and believes the pace within the side will upset the ‘slower’ Senegalese.

“We all come from teams who have lost games before; we have all been in a hole before. We came together as players and spoke about it. We keep motivating ourselves because we know we are a good team and we will come back strongly in the remaining two games,” Phala told SAFA Media.

“Senegal has big boys who play overseas and they play good football. They beat Ghana which shows they are no pushovers. We knew coming to this tournament that all our first three games are going to be difficult. So against Senegal we must just go there and take our chances and win that game,” added Phala.