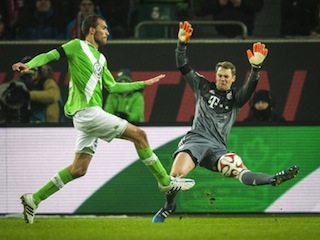 Wolfsburg breathed life into the Bundesliga’s title race on Friday with a shock 4-1 hammering of leaders Bayern Munich, who suffered their heaviest German league defeat for six years.

Bayern leaked as many goals in Wolfsburg as in the entire first half of the season as the home side ruthlessly exploited Bayern’s numerous errors.

Netherlands striker Bas Dost gave the hosts a deserved 2-0 lead at the break as his thunderbolt volley crashed into off the post just before the half-time whistle following an earlier goal.

For the first time in three years, Bayern found themselves 2-0 down at half-time on their way to their heaviest league defeat since losing 5-1 at Wolfsburg in April 2009 — when Wolves won the Bundesliga title.

There were emotional scenes before kick-off at the Volkswagen Arena with a minute’s applause for Belgium Under-21 international Junior Malanda, who was killed in a car crash earlier this month.

The hosts went ahead on their first venture into the Bayern half.

Daniel Caligiuri’s long-range cross from the sidelines was squared by De Bruyne and Dost drove his shot past the diving Manuel Neuer with four minutes on the clock.