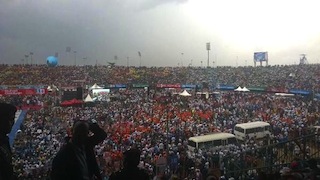 Tens of thousands of supporters of the All Progressives Congress, APC, took Lagos by storm as they defied the early morning shower on Friday to give a rousing welcome and support to the presidential candidate of the party, General Muhammadu Buhari and his running mate, Professor Yemi Osinbajo.

The carnival-like scene was enacted as the party’s presidential campaign train hit Lagos, one of the major strongholds of APC.

Teslim Balogun Stadium, Surulere, Lagos, southwest Nigeria, venue of the rally, witnessed an unprecedented crowd of party faithful from all walks of life.

Members of the party across the 20 Local Governments and 37 Local Council Development Areas, political office holders, candidates in the forthcoming February elections among others stormed the venue of the rally.

The Hausa community in Lagos came in their thousands displaying old and new portraits of Buhari. Also in attendance were different groups of pysically challenged people such as the deaf, blind and others. The party supporters took over the football pitch in the rain to dance to music from the loud speakers. The old, young and the disabled were not left out in the dancing game. Some waved their brooms shouting ‘Sai Buhari, Change Jonathan’.

The Coordinator of the Lagos office of the Buhari/Osinbajo Campaign Organisation, James Abiodun Faleke, while speaking with P.M.NEWS, expressed appreciation that the state stood still for Buhari and Osinbajo.

Faleke, a member of the House of Representatives and Chairman of the House Committee on Anti-Corruption, Ethics and National Values, stated that the mobilization committee worked day and night for a successful outing.

“We have shown the whole world that Lagos is wholly for Buhari/Osinbajo, APC and other candidates of the party. We worked day and night apart from volunteer groups and non-governmental organisations who indicated their interest in showing solidarity and support for our party and our candidates,” he said.

According to him, the Lagos presidential rally of the APC has displayed to the whole world the total support of the people of Lagos for Buhari/Osinbajo and the APC as a whole.

He said that the party will ensure that it controls both the executive and legislative arms of government come February 14 and 28.

“Our party must control both the legislative and executive arms of government in order to give our people benefit of democracy. The implication is that all our bills will see the light of the day.

“Before now, the government at the centre didn’t care about the opposition. Our bills were always thrown in the trash can. If we control the centre come February 14, Nigerians will sing a new song,” he said.

Muniru urged all residents and supporters of the APC to remain calm, focused and avoid violence in spite of the provocation by the opponents of the party.

He urged all eligible voters who have not yet collected their Permanent Voter’s Cards (PVCs) to proceed to their ward offices where the cards are now available for collection.