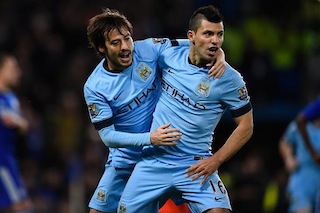 Loic Remy put Chelsea in front in the 41st minute, but Silva touched in a shot from Sergio Aguero four minutes later to keep the defending champions five points behind Jose Mourinho’s side with 15 matches remaining.

Manuel Pellegrini’s City have won only one of their last five league games, but following successive defeats by Arsenal and Middlesbrough, they at least prevented Chelsea from streaking away into the distance.

Chelsea great Frank Lampard, sent on by City as a late substitute, was afforded a warm reception on what was likely to prove his final appearance at Stamford Bridge, and it was a broadly positive afternoon for the hosts.

While the sight of Willian limping off late on was a concern, they coped well without the suspended Diego Costa and the injured Cesc Fabregas, and remain very much on track for a first league title since 2010.

With Costa beginning a three-game ban for treading on Liverpool’s Emre Can, Mourinho plumped for the pace of Remy over the battering-ram qualities of Didier Drogba up front, but it was City’s attackers who showed their opponents a clean pair of heels in the early stages.

Inside the first minute, Jesus Navas drifted past Cesar Azpilicueta and worked Chelsea goalkeeper Thibaut Courtois with a rising shot, while Fernandinho had a shot deflected wide.

Aguero gave Chelsea three scares, obliging Kurt Zouma to make a perfectly timed last-ditch tackle, drawing a parry from Courtois and then rolling a shot a foot wide after John Terry failed to cut out a long ball.

In response, Oscar could only shoot tamely at Joe Hart after Remy had dispossessed Vincent Kompany and galloped down the left flank, but four minutes before half-time, the hosts went in front.

Branislav Ivanovic’s cross from the right was volleyed back across goal at the far post by Eden Hazard and Remy tucked away his fifth goal of the season from inside the six-yard box.

It seemed an ideal time to take the lead, but in the final minute of the half, City levelled following an uncharacteristic error of judgement by Courtois.

The Belgium international has been one of Chelsea’s stand-out performers this season, but he flapped at Navas’s cross from the right and when Aguero drilled the ball back towards goal, Silva slid in to score.

Navas continued to prove City’s best outlet in the second half, teeing up Fernandinho for a downward header that bounced up and had to be touched over by Courtois and setting up James Milner to loop a header over the bar.

Fernandinho, meanwhile, curled a shot at Courtois after Ramires’s run had been checked by Milner.

Mourinho had refused to speak to the media in the build-up to the game, apparently in protest at Costa’s ban, but though he reacted to every adverse decision with trademark theatricality on the touchline, the result suited him better than Pellegrini.