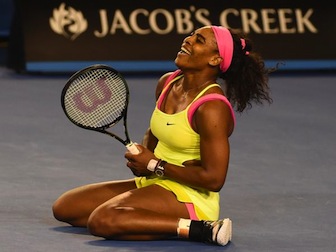 The triumph means the world number one overtakes 18-time major champions Martina Navratilova and Chris Evert to go a clear second on the all-time Open-era winners’ list, three behind Steffi Graf on 22.

It also extends her staggering decade-long dominance of arch rival Sharapova, with the world number one posting her 16th straight victory over the Russian.

At 33, she also became the oldest woman to win the title in the Open-era, taking her tally at Melbourne Park to six titles in six appearances in the final.

Contesting her 23rd Slam final, she surpassed Navratilova and Evert as she chases Graf’s Open-era record of 22. Australia’s Margaret Court, who played many of her match before the Open-era, has 24 titles.

The first Australian final in a decade to feature the tournament’s top two seeds was a one-sided affair in the first set although Sharapova rallied to make a contest of it in the second.

An intensely focused Williams outgunned Sharapova, cannoning down 18 aces, including a 203 kmh (166 mph) thunderbolt and glaring at her opponent during key moments as Sharapova struggled to stay in the march.

Sharapova made a disastrous start when she double faulted to go down a break in the opening game, succumbing to pressure as Williams aggressively stood inside the baseline and easily read the Russian’s intent.

The American then pounced on a tentative return from Sharapova in the next game to hold serve after swatting a pin-point backhand to the corner of the court.

Sharapova, wary of getting into a slugfest with the game’s most powerful hitter, surprised Williams by throwing occasional drop shots into the mix, successfully holding serve.

Heavy rain interrupted play at 3-2, with Williams taking shelter and towelling down as the roof was closed, while Sharapova sat courtside then performed warm-up exercises.

Williams emerged briefly but went back inside after suffering a coughing fit before the match finally resumed after 13 minutes.

The American showed no sign of losing momentum though, blasting an ace with her first shot and then capitalising after Sharapova gave her three break points with another double fault.

Williams committed a double fault of her own to hand Sharapova a break against the run of play but immediately broke back to take the set after 47 minutes.

With the final threatening to become a massacre, Sharapova’s fighting qualities emerged in the second set, with her serve improved as she held twice early, jubilantly fist pumping each time.

She started taking chances attacking Williams’ serve but the American simply got herself out of trouble with three aces.

Sharapova battled to a rare break point in the ninth game but hit her forehand wide after failing to handle the blistering power of Williams’ return.

She had to hold serving with Williams up 5-4, holding off championship point with a desperate forehand down the line.

Finally gaining confidence, she held Williams to love in her next service game to take it to a tie-break.

She managed to fend off another championship at 6-5 then Williams thought she had sealed the win with an ace, giving a wry grin when the umpire called let.

She slotted home another ace to seal the tournament, waiting for the umpire’s call this time before jumping for joy.