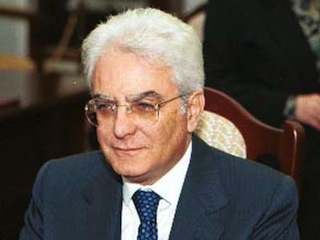 Sergio Mattarella, a constitional court judge from Sicily hwo is seen as a symbol of Italy’s battle against organised crime, was elected Italy’s new president on Saturday.

The 73-year-old Sicilian, who was backed by Prime Minister Matteo Renzi’s centre-left Democratic Party (PD), succeeds the hugely popular Giorgio Napolitano, who is stepping down because of his advanced age.

Mattarella is little known to the public but is widely respected in politics after a 25-year parliamentary career and several stints as minister in governments of the left and right.

Renowned for his integrity, he entered politics after his elder brother was murdered by the Sicilian Mafia.

Mattarella won 665 votes in the fourth round of voting by a 1,009-member electoral college, composed of members of the two houses of parliament — the Senate and the Chamber of Deputies — and 58 representatives of the regions.

The threshold for victory at the fourth round fell to a simple majority, down from the two-thirds majority needed for a win in the three opening stages.

As the ruling party’s candidate Mattarella had support from most of the 415 PD politicians in the electoral college as well as several allied lawmakers.

But Italian presidential elections are nothing if not unpredictable, meaning the vote was not devoid of suspense.

In 2013, Romano Prodi was the favourite to succeed Napolitano, but a revolt within the PD scuppered his chances and blocked a decision, forcing Napolitano to agree to start a second mandate which he always insisted he would not finish.

Now 89, Napolitano announced earlier this month that he was too tired to carry on in what is a largely ceremonial role but can become politically significant during times of crisis over the formation of new governments.

Renzi’s backing for Mattarella has been interpreted as the end of a temporary alliance the premier forged with disgraced former prime minister Silvio Berlusconi to help drive labour market and electoral reforms through parliament.

Mattarella is seen as an “anti-Berlusconi” figure, having severed his ties with the centre right in Italian politics partly because of his distaste for the media tycoon, who still heads the opposition Forza Italia party despite a tax fraud conviction.

Berlusconi was reported Friday to be feeling “betrayed” by Renzi. A popular theory is that the Forza Italia leader was hoping for a sympathetic figure to be installed as president to increase his chances of winning a pardon over his criminal conviction which would allow him to return to parliament.