Yakubu back in England with Reading 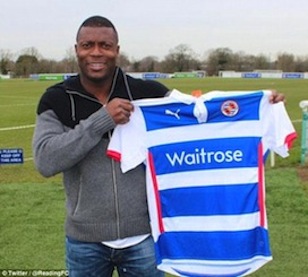 Yakubu Ayegbeni has returned to English football after signing for championship side, Reading.

Yakubu joined Steve Clarke’s ranks signing until the end of the season. The striker signs after left back, Jure Travner and Chelsea loanee Nathaniel Chalobah arrived at the Madejski Stadium earlier in the January window.

Yakubu’s previous stint in England includes playing for Portsmouth, Middlesbrough, Everton and Blackburn Rovers as a striker and ranks third in the top 10 African scorers with 95 goals, behind only Didier Drogba (103) and Emmanuel Adebayor (96).