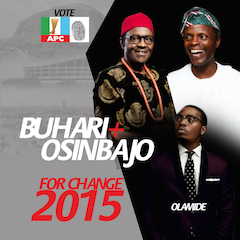 Rap star Olamide has expressed his support for the Buhari/Osinbajo presidential candidature on the All Progressives Congress platform as he drops two APC campaign songs titled APC Ese (Thank You) and The Change We Want.

The new songs are in form of appreciation for the presence of General Muhammodu Buhari’s running mate, Professor Yemi Osinbajo recent attendance of Olamide’s album launch.

Apart from the release of the personal songs to support the duo, Olamide has also featured in some other campaign songs for APC.