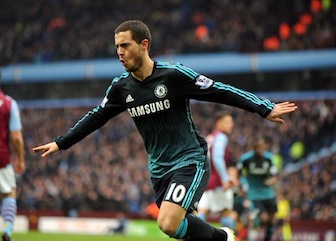 Manchester City’s 1-1 draw at home to Hull City allowed Chelsea to establish a seven-point lead in the Premier League by winning 2-1 at Aston Villa on Saturday.

City had kept Chelsea within their sights by holding Jose Mourinho’s side to a 1-1 draw at Stamford Bridge last weekend, but after slipping up against Hull, the champions’ grip on the title is weakening.

James Milner earned City a share of the points with an injury-time free-kick after David Meyler had put Hull ahead in the first half, but they have now won only once in six league games.

City manager Manuel Pellegrini fielded Edin Dzeko up front alongside Sergio Aguero, but it was Hull, who began the game in the bottom three, who showed the greater enterprise.

Ahmed Elmohamady hit the crossbar with a header from a Robbie Brady cross before Meyler broke the deadlock in the 35th minute, sweeping home after Gaston Ramirez’s low shot hit the right-hand post.

After Aguero had hit the bar in the second half, Milner bent in a 25-yard free-kick in the 92nd minute, but Hull held out to condemn City to a fifth game without a win in all competitions.

claimed his first victory at Villa Park at the sixth attempt.

Eden Hazard broke the deadlock in the eighth minute, finishing from Willian’s incisive pass after Oscar had found space on the right.

The unmarked Jores Okore headed in a 48th-minute equaliser — ending an 11-hour goal drought for Villa — but Branislav Ivanovic restored Chelsea’s lead with a powerful left-foot shot in the 66th minute.

Elsewhere, Senegalese forward Sadio Mane struck in the 93rd minute to take Ronald Koeman’s side above Manchester United and into third place, ahead of United’s trip to West Ham United on Sunday.

Meanwhile, Swansea City rescued a point in a 1-1 draw at home to Sunderland after Jermain Defoe’s first-half opener was cancelled out by a 66th-minute header from Ki Sung-yueng.

In Saturday’s late game, Liverpool visit Everton for what will be Steven Gerrard’s last Merseyside derby before he leaves Anfield for the Los Angeles Galaxy.