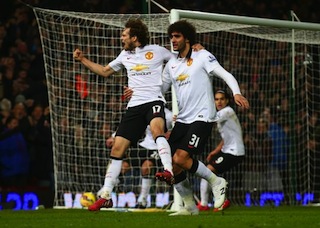 Daley Blind’s stoppage-time goal rescued a point for Manchester United in a 1-1 draw away to West Ham at Upton Park on Sunday as they failed to leapfrog Southampton into third place in the Premier League table.

Cheikhou Kouyate’s superb finish, with the Senegal midfielder, who had his back to goal, controlling a Mark Noble free-kick before volleying home in the 49th minute, looked as if it would win the game for the Hammers.

But after both sides had chances to score late on it was Blind who, after Marcus Rojo’s ball into the box was only partly cleared, fired home to seal a draw in the second-minute of stoppage-time.

There was still time for United’s Luke Shaw to be sent off for a second bookable offence but his exit came too late to have a bearing on the result.