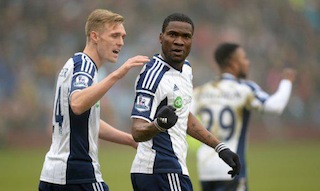 Burnley let slip a two-goal lead for the second successive home match as they were held to a 2-2 draw by fellow Premier League strugglers West Browmich Albion at Turf Moor on Sunday.

This result did see the Clarets climb out of the bottom three, albeit they are now just a point clear of the relegation zone, but things could have been so much better for Sean Dyche’s side.

However, Burnley’s longstanding weakness in defending corners once more proved their undoing, both of the Baggies’ goals coming from the set-piece.

But Burnley at least came away with a draw, having lost 3-2 to Crystal Palace after going 2-0 up in their last home match.

Burnley were 2-0 in front after just over half an hour on Sunday thanks to goals Ashley Barnes and Danny Ings.

But Chris Brunt pulled a goal back for West Brom in first-half stoppage time with a header from a corner before, in a similar scenario, Brown Ideye headed the Baggies level in the 67th minute, with this result seeing the Midlands club remain two points in front of their hosts.

But any boost Fletcher’s leadership might have given the Baggies was soon cancelled out by the fact they fell behind in just the 11th minute.

Ings, reportedly the target of interest from Liverpool during the transfer window, was the creator as his cross from the left saw Barnes beat Joleon Lescott to head past goalkeeper Ben Foster from six yards out.

There was further joy for the Turf Moor faithful when the Clarets doubled their lead, this time with a header from Ings in the 32nd minute.

Kieran Trippier’s dummy created space for George Boyd down the right and his precise cross allowed Ings to nod home from close range.

But just when it seemed Burnley would go into the break buoyed by a two-goal lead, West Brom hit back when Brunt headed in from a corner.

Brunt then became the provider midway through the second half with the corner that saw Ideye, after losing his marker all too easily, head home in yards of space to make it 2-2.

It was the 14th headed goal that Burnley had conceded in the league so far this season — the most in the English top-flight.

However, Burnley rallied and with five minutes they appealed for a penalty when Ben Mee’s cross from the right was handled by Gareth McAuley but referee Mike Dean was unmoved.

But West Brom’s Saido Berahino twice went close to winning the game in the closing minutes.

First, he shot wide from eight yards out and then, from even closer range, saw Burnley keeper Tom Heaton produce a fine save.