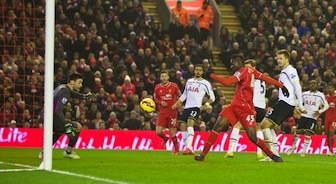 Mario Balotelli finally scored his first Premier League goal for Liverpool to seal a dramatic 3-2 win over Tottenham, while Arsenal moved up to fourth place with a 2-1 victory against Leicester on Tuesday.

Balotelli has endured a miserable time at Anfield since his pre-season move from AC Milan, but in his 13th league appearance for the Reds he picked the perfect moment to break his goal drought with an 83rd minute winner after coming off the bench.

The Italian striker had only scored twice previously for Liverpool, with his last coming against Swansea in the League Cup in October.

Balotelli’s headline-grabbing intervention provided a fitting finale to an entertaining encounter which saw Liverpool lead through Lazar Markovic’s 15th minute goal before in-form Tottenham forward Harry Kane continued his hot streak with a 26th minute equaliser to take his goal tally for the season to 23.

Just hours after the Premier League announced a staggering 70 per cent increase in the value of its British television rights for the 2016-19 seasons, with Sky and BT Sports paying a combined £5.1 billion ($7.8 billion, 6.9 billion euros) to show games, this was a thriller to justify that huge outlay.

That set the stage for Balotelli, who replaced Sturridge in the 74th minute and netted nine minutes later when he tapped-in Adam Lallana’s cross.

Brendan Rodgers’ side stay seventh but move within one point of sixth placed Tottenham in the battle to qualify for the Champions League via a top-four finish.

“Mario Balotelli has been working hard in training and for the last couple of weeks he’s been ill so it’s great that he scored the winner,” Liverpool assistant manager Colin Pascoe said.

Arsenal stole a march on their top-four rivals with an edgy success against bottom of the table Leicester at the Emirates Stadium.

Leicester manager Nigel Pearson remained in charge despite reports of his dismissal on Sunday, 24 hours after he grabbed Crystal Palace midfielder James McArthur around the throat on the touchline during his side’s 1-0 defeat.

But it was his Arsenal counterpart Arsene Wenger who was celebrating when French defender Laurent Koscielny swept home from Mesut Ozil’s corner in the 27th minute.

Theo Walcott doubled Arsenal’s lead in the 41st minute when he finished off the rebound after Leicester goalkeeper Mark Schwarzer had parried Ozil’s shot.

Leicester’s club record signing Andrej Kramaric netted in the 61st minute with his first goal since joining the Foxes, the £9 million signing lashing home from a Riyad Mahrez cross, but Arsenal survived late pressure to climb above Manchester United, who can reclaim fourth with a win against Burnley on Wednesday.

QPR ended their Premier League record run of 11 consecutive away defeats with a 2-0 win at Sunderland that lifted the managerless Hoops out of the bottom three.

On a night when QPR chairman Tony Fernandes hinted that the search for a replacement for Harry Redknapp was reaching its conclusion, with former Swansea chief Michael Laudrup strongly linked with the manager’s job, caretaker boss Chris Ramsey oversaw a vital result at the Stadium of Light.

They took the lead for the first time in an away game this season when Dutch midfielder Leroy Fer met Matt Phillips’ cross with a powerful header in the 17th minute.

Bobby Zamora increased QPR’s lead on the stroke of half-time with a superb strike from another Phillips cross.

Hull climbed out of the relegation zone at Aston Villa’s expense with a crucial 2-0 win at the KC Stadium.

Steve Bruce’s side had the worst record at home in the league this season with just nine points from 11 games.

But they made a perfect start when Dame N’Doye picked out Nikica Jelavic in the 22nd minute and the Croatian striker fired in a shot that took a big deflection off Ciaran Clark and looped in.

With irate Villa fans holding up a banner calling for boss Paul Lambert to be sacked, their team fell further behind in the 74th minute when N’Doye scored his first Hull goal after his initial effort was saved.