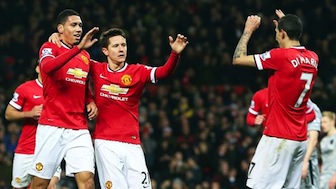 Manchester United defender Chris Smalling scored a rare brace to give his side a 3-1 victory over Burnley that lifted back into third place in the Premier League on Wednesday.

With United owners Avi and Joel Glazer making one of their infrequent appearances at Old Trafford, struggling Burnley briefly threatened to spoil the party when Danny Ings equalised the first of Smalling’s headed efforts.

But Smalling netted again before Robin van Persie’s late penalty kept United on course for a place in next season’s Champions League.

Smalling made the most extraordinary impact on the game, a mere 22 seconds after coming onto the field as a fifth minute replacement for Phil Jones, who had injured himself making an early interception.

United manager Louis van Gaal threw on the substitute after Patrick McNair had won a corner with a 22-yard shot that goalkeeper Tom Heaton parried at the expense of a corner.

From Wayne Rooney’s resulting set-piece, van Persie flicked on at the near post, Radamel Falcao headed back into the six-yard area from the far and Smalling made it three United headers in quick succession as he nodded home from close range for only his second goal of the season.

But United held that lead for just six minutes before Ings equalised.

George Boyd played full-back Kieran Trippier away down the right and his superb cross into the six-yard area found Ings, who had lost his marker Smalling, and his magnificent diving header gave David de Gea no chance.

In fact, Burnley had already wasted two promising openings by this point.

First, Michael Keane headed off-target from a Trippier corner, then Michael Kightly found himself clean through on goal but shot directly at de Gea.

After equalising, Burnley attacked with enthusiasm and belief.

Within the space of 60 seconds, Ings had a shot blocked from a dangerous position and Ashley Barnes was just wide from 18 yards.

Burnley manager Sean Dyche had made his first change to his starting line-up in 11 games with his selection of Kightly for the injured Dean Marney and the winger was cautioned on 25 minutes when he ended a United counter attack by bringing down Angel di Maria.

Ings, who looks increasingly likely to leave Burnley when his contract expires at the end of the season, continued his impressive outing with a near-post header just off the mark, but United’s injury problems continued well before the interval when Daley Blind was forced off to be replaced by Ander Herrera.

Kightly’s pass to Ashley Barnes presented the Burnley forward with a shot which he placed wide from eight yards as United continued to look highly susceptible in defence.

It was against the run of play that United went into the break back in front following a well-worked corner and exchange of passes between Rooney and di Maria.

The Argentinian was allowed space and time to cross for Smalling who rose well to head in emphatically from six yards.

If United hoped the timing of that goal, two minutes into stoppage time, would quell Burnley’s fire, they were mistaken and within two minutes of the restart should have conceded.

Boyd’s right-wing cross should have been cleared by Smalling or Jonny Evans, but both miskicked in embarrassing fashion, allowing the surprised Ings a shot from six yards which was well saved by de Gea.

Adnan Januzaj made a strong run and shot which Heaton was required to save at full stretch although it was a half that produced far fewer chances than the first.

Moments after a poor miss by Kightly, however, an errant pass by Scott Arfield allowed di Maria to break clear and into the area where the same Burnley man fouled him.