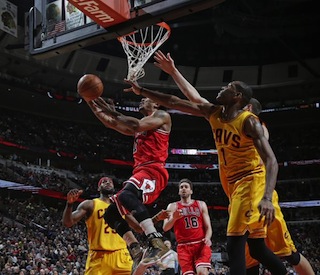 Derrick Rose goes for the basket in style

Former NBA Most Valuable Player Derrick Rose didn’t garner an All-Star berth, but he starred on Thursday in the league’s last game before the mid-season showcase.

Rose scored 30 points and handed out seven assists to lead the Bulls to a 113-98 victory over LeBron James and the Cleveland Cavaliers.

Tony Snell contributed 22 points on 9-of-11 shooting for the Bulls and Pau Gasol — who did get an All-Star nod — notched his 14th straight double-double with 18 points and 10 rebounds.

Joakim Noah added 10 points, 15 rebounds and seven assists for Chicago, who head into the All-Star break leading the Cavs by 1 1/2 games atop the Central Division.

The contest was the only game on Thursday’s slate, and regular-season action won’t resume until next Thursday.

All-Star weekend festivities kick off in New York on Friday with the Rising Stars Challenge at the Barclays Center in Brooklyn.

Saturday’s events include the always entertaining slam dunk contest, while the 64th All-Star Game will be played on Sunday at Madison Square Garden in Manhattan.

Chicago were without Jimmy Butler, sidelined with a strained right shoulder, while Cleveland’s Kevin Love sat out with a corneal abrasion he suffered on Wednesday when he was accidentally poked in the eye by an opponent.