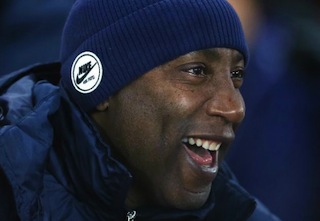 Chris Ramsey was confirmed as QPR manager until the end of the season on Friday.

Ramsey took over the struggling Premier League team on a caretaker basis following Harry Redknapp’s resignation last week and led them to their first away points of the campaign with a 2-0 win at Sunderland on Tuesday.

QPR chairman Tony Fernandes had said earlier this week that he was close to securing his “dream manager”, with former Swansea boss Michael Laudrup installed as the bookmakers’ favourite for the job.

But Laudrup, currently in charge of Qatari side Lekhwiya, distanced himself from the role, as did former Tottenham manager Tim Sherwood.

And ex-England Under-20 manager Ramsey has now been handed the chance to make his name by leading QPR to Premier League survival.

The Hoops are currently 17th in the table and above the relegation zone on goal difference with 13 games remaining.

“In the wake of Harry Redknapp’s resignation, it was my desire to identify the right individual for the job and at this time, we believe Chris is the ideal candidate,” Fernandes told QPR’s website.

“He has impressed everyone here in his short time in charge and I firmly believe he is the right man – working closely with Les – to lead us until the end of the season.

“Chris has an opportunity now to stamp his authority and class on the position. He is part of our long-term plans at QPR.”

Ramsey will work alongside first-team coach Kevin Bond and goalkeeping Kevin Hitchcock, while director of football Les Ferdinand will also have a presence on the training ground.

The 52-year-old, in his first club managerial role in England, was initially installed in a caretaker role, after being recommended to Fernandes by Ferdinand.

Ferdinand brought Ramsey to Loftus Road as academy manager in October after the pair had previously enjoyed a close relationship working at Tottenham.

QPR lost 1-0 at home to Southampton in Ramsey’s first game in charge six days ago, but they climbed out of the bottom three after Tuesday’s victory at the Stadium of Light and Ramsey is confident they can preserve their top-flight status come May.

“This is a great privilege and an honour for me. I am excited about leading the club between now and the end of the season,” he said.

“I believe in this group of players, the staff, and everyone working at the club.

“During this period, I will still be involved in the running of the academy for the rest of this season and beyond. Continuity is very important when it comes to the development of young players, which is something I am very mindful of.”

QPR are not in action this weekend and resume their league campaign at Hull next Saturday.