Rousing Welcome For Ambode In Alimosho 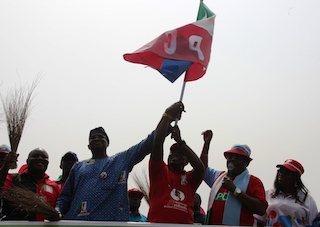 The campaign train was led by the state Governor Babatunde Raji Fashola.

Governor Fashola presented Ambode to the delight of the huge crowd and the shout of ‘Ambooo’ rent the air, describing him as tested and trusted hand who had equally worked with him.

Fashola urged the crowd to campaign massively for Amode and APC, while urging them to go and collect their permanent voting card (PVC) and vote wisely for Akinwunmi Ambode in the coming election.

In his speech Ambode recalled his years as council treasurer in Alimosho.

“I was a treasurer in Alimosho; made good friends here and enjoyed my stay. My promise to you is that APC will further develop Alimosho, the governor is the actualiser while I am the consolidator.”

Continuing Ambode said: “I will build on existing structure and even do more. Alimosho will experience further development, and we will embark on an upgrade of infrastructure that will make Abesan stadium rise to international standard.”

Solomon Ogundola, party leader in Alimosho said that Lagos has been lucky to have young and brilliant people at the helm of affair and praises the intellectual capacity of National leader of the party Asiwaju Bola Ahmed Tinubu who produced Fashola and now Akin Ambode, whom he described as educated, experienced and young man with a lot of energy and zeal to consolidate on the present achievements of Governor Fashola.