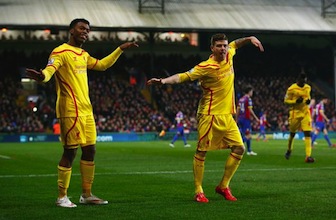 Liverpool claimed a first victory at Selhurst Park in seven attempts to reach the FA Cup quarter-finals on Saturday, coming from behind to win 2-1 against Crystal Palace.

Liverpool’s Premier League title challenge ran aground in a 3-3 draw at Palace last season and they lost 3-1 there in November, so they had reason to fear when Fraizer Campbell netted a 15th-minute opener.

But the half-time introduction of Mario Balotelli tipped the tie in the visitors’ favour and after Daniel Sturridge equalised, Adam Lallana scored in the 58th-minute to give Liverpool a first win at Palace since 1997.

“After we scored, I thought we were very good. We had 15 efforts on goal in the first half, but we weren’t aggressive enough,” Liverpool manager Brendan Rodgers told BT Sport.

“I wanted us to keep the width on the pitch. We changed it around at half-time and it worked well for us.”

Palace manager Alan Pardew scored a famous semi-final winner against Liverpool as a player in 1990 and he had another goal against the seven-time winners to celebrate when Campbell broke the deadlock.

At the other end, Mignolet had to produce a smart save to deny Gayle in a one-on-one, but after Balotelli was sent on in place of Markovic to join Sturridge up front, Liverpool took control.

Sturridge equalised in the 49th minute, slamming a back-post volley between Speroni’s legs from Henderson’s clever pass, before Lallana scored the winner after Speroni could only parry Balotelli’s fierce free-kick.

Stoke manager Mark Hughes saw his side take a 10th-minute lead against his former club when Peter Crouch volleyed home at a corner, only for King to head in an equaliser in the 36th minute.

After Geoff Cameron was sent off for holding King back, Rudy Gestede put Blackburn in front with a penalty on the stroke of half-time and King completed his treble with quick-fire goals early in the second period.

Asked if his side could go on and claim a first FA Cup trophy since 1928, victorious manager Gary Bowyer joked: “Do me a favour, I’ve just finished this game!

“We are just delighted to be in the next round. We would love another home tie and then we will go from there.”

The Nigeria striker, West Brom’s £10 million ($15.2 million, 13.4 million euros) record signing, scored either side of a 25-yard strike from James Morrison to take his tally to four goals in three games.

West Ham substitute Morgan Amalfitano was sent off after shoving Chris Brunt in the face and Saido Berahino added a fourth to rubber-stamp West Brom’s progress to the quarter-finals for the first time since 2008.

“He is scoring goals and that takes the weight off your shoulders, and he looks a good player.”

Reading also booked a sixth-round berth with a 2-1 win at fellow Championship side Derby County, which came courtesy of a late strike by former Portsmouth, Middlesbrough and Everton striker Yakubu.