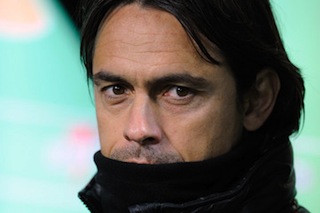 Nine-man AC Milan were whistled off the pitch at the San Siro after a 1-1 draw with struggling Empoli on Sunday further dented the Rossoneri’s hopes for European football next season.

Italy international Mattia Destro provided some cheer to the struggling Serie A giants with his maiden goal for the club against the run of play five minutes before the half-time interval.

Lopez mis-hit a clearance and in a bid to make amends pulled off a great stop to send Francesco Tavano’s shot wide of the target, although the Spanish ‘keeper was outside his area and was immediately ordered off.

Defender Gabriel Paletta, one of several players signed by the club in the January transfer window in a bid to revive flagging fortunes, then pulled up with a hamstring injury and could not play on, meaning Milan finished the game with nine men because they had used up all three substitutes.

Milan remain in 11th spot, at 23 points behind leaders and champions Juventus ahead of their game later Sunday away to Cesena.

Coach Filippo Inzaghi praised Empoli’s enterprise but, having seen defender Alex forced off after just seven minutes with a suspected broken nose, could not believe his side’s misfortune.

“We’re in a difficult period, in every game something happens. It’s incredible to lose all these players, especially at the start with Alex,” Inzaghi told Sky Sport.

“They’re a newly-promoted team but they have the makings of a great side, they already gave Roma and Juventus a scare. We have to keep on growing but we’re struggling for consistency due to numerous absences.”