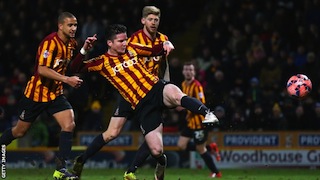 Third-division Bradford City continued their remarkable progress in the FA Cup by beating Premier League Sunderland 2-0 on Sunday to reach the quarter-finals for the first time since 1976.

Bradford, beaten League Cup finalists in 2013, stunned Chelsea 4-2 at Stamford Bridge in round four and they pulled off another upset at Valley Parade courtesy of a John O’Shea own goal and a strike by Sunderland old boy Jon Stead.

Phil Parkinson’s side, 37 places below Premier League strugglers Sunderland in League One, will now take their place in Monday’s draw for the last eight.

Bradford’s fans witnessed home wins over Arsenal and Aston Villa during their side’s run to the League Cup final two years ago and they had a goal to celebrate within three minutes of kick-off against Sunderland.

Filipe Morais’s free-kick from wide on the right found Billy Clarke at the back post and although his left-foot shot was flying well wide, it struck Sunderland captain O’Shea on the leg and cannoned into the net.

Sunderland striker Steven Fletcher had a penalty appeal waved away and home goalkeeper Ben Williams saved from Danny Graham and Patrick van Aanholt before Stead made it 2-0 in the 61st minute.

This time Sunderland winger Adam Johnson was at fault, dallying on the ball before playing a clearance straight to James Hanson, whose header freed Stead to squeeze a shot beneath visiting goalkeeper Vito Mannone.

The on-loan Huddersfield Town striker has now scored in all five rounds of this season’s competition.