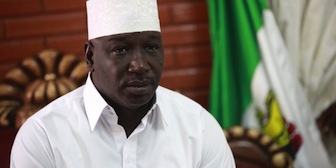 The Deputy Governor of Borno, Alhaji Zannah Mustapha, on Sunday commended the efforts of military and other security agencies to end insurgency in the country.

Mustapha made the commendation in an interview with NAN in Maiduguri. He expressed optimism that the insurgency would end soon “going by the successes recorded by the military in its bid to flush out the insurgents”.

Mustapha said last week’s attack on Biu by the insurgents was a sign of desperation, noting that they had failed in previous attempts to gain entry into the town, hence the use of suicide bomb attack.

He commended youth vigilantes, local hunters and members of the community for keeping vigil against the insurgents especially in Biu. “The military has been working in concert with vigilantes and other groups in safeguarding lives and properties in Biu.

“As it is now, it is very difficult for the insurgents to carry out attacks easily, so they have resorted to using female suicide bombers,” he said.

Mustapha advised the vigilantes to remain focus in their bid to assist the military in checkmating the insurgents’ activities.

He said that the state government had taken care of the medical bills of the 20 persons injured in the blast. “I have visited the families of the victims in Biu where I commiserated with those who lost their bread winners.

“Government has also taken over payment of medical bills of the 20 injured persons pending when they will be discharged from the hospital,” Mustapha said.

He said government had also assisted the victims’ families with some cash to enable them take care of urgent family needs.

“We are not compensating them for the lost. What we are trying to do is to assist them by providing succour so they can take care of urgent family needs,” Mustapha said.

Twenty others were injured by the blast.