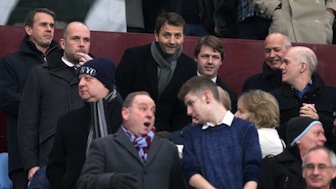 Tim Sherwood in the stands

Leicester enjoyed the best of the first half at Villa Park, with Marcin Wasilewski’s header grazing the post and Matty James forcing Shay Given into a sensational one-handed save.

But Sherwood, watching from the stands after being appointed as the successor to Paul Lambert on Saturday, made a visit to the home changing room at the interval and Villa were a different team in the second period. 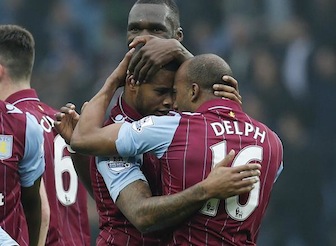 After Christian Benteke had twice gone close, Leandro Bacuna broke the deadlock in the 68th minute when he collected a pass from Ron Vlaar, cut inside Danny Simpson and curled a shot around Australian goalkeeper Mark Schwarzer from 18 yards.

A terrible blunder from the veteran Schwarzer, who allowed a tame shot from Villa substitute Scott Sinclair to squirm past him, saw the home side double their lead in the 89th minute.

Andrej Kramaric replied for Leicester with a magnificent header in the first minute of stoppage time, but it was too little, too late.

Holders Arsenal continue their defence of the trophy at home to Middlesbrough later on Sunday, while Sunderland visit third-tier Bradford City, who memorably beat Premier League leaders Chelsea in round four.

Manchester United visit League One side Preston North End on Monday for their third consecutive away tie against a lower-league club in this season’s competition.