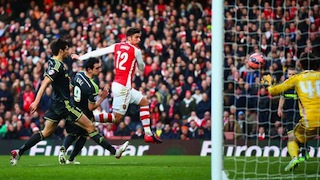 FA Cup holders Arsenal were handed a potential showdown with Manchester United in Monday’s draw for the quarter-finals.

The draw took place shortly before kick-off in United’s fifth round tie at Preston, with the Gunners selected to travel to either Old Trafford or Deepdale for their last eight clash.

Arsenal defeated Hull in last season’s FA Cup final to end their nine-year trophy drought — a barren run which had dated back to their victory over United in the 2005 FA Cup final.

Elsewhere in a draw conducted by England manager Roy Hodgson and Brian Finney, son of the legendary Preston winger Tom Finney, giant-killers Bradford were handed a home tie against second tier team Reading as they look to make the semi-finals to cap a remarkable Cup run that has included a stunning 4-2 win at Premier League leaders Chelsea in the fourth round and a 2-0 success against top-flight side Sunderland in the fifth round on Sunday.

That pairing ensures at least one Football League side will make it to the final four of the competition.

Liverpool’s hopes of giving Steven Gerrard an emotional Wembley send-off on his 35th birthday were boosted as they were drawn to face Championship side Blackburn at Anfield.

Reds captain Gerrard has agreed a deal to leave Liverpool for Los Angeles Galaxy at the end of the season, making the FA Cup final potentially his final match for the club he has served with great distinction since 1998.

Draw for the FA Cup quarter-finals made on Monday:

Ties to be played on the weekend of March 7/8