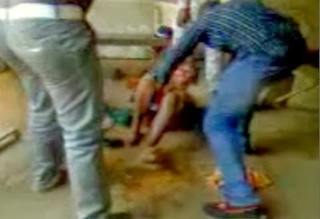 Five men who were accused of torturing three women by rubbing pepper in their private parts in the Ejigbo area of Lagos, will be arraigned before Justice Oluwatoyin Ipaye on March 3.

The suspects were accused of assaulting one Miss Juliana Agoma, Mrs Ajoke Agoma and Mrs Nike Salami by inserting pepper into their private parts.

When the matter came up for hearing today the accused persons were absent.

Giving reasons for the absence of the defendants, the Lagos State Director of Public Prosecution, Mrs E.I Alakija told the court that all the defendants are all on bail and had no idea that the matter would come up.

“All the accused are on bail and one of them is even at the Magistrate court trying to perfect his bail conditions,” Alakija said.

Before adjourning the case till March 3, Justice Ipaye told the DPP to ensure that the counsels to the accused are duly notified before the adjourned date for arraignment and possible hearing.

It would be recalled that the suspects were arraigned before an Igbosere Magistrates’ Court in Lagos, over the alleged assault of the three women at the Oba Morufu International Market in Ejigbo.

The charge filed against them indicated that they were arraigned for conspiring to commit murder and indecent acts, demanding property with violence, with intent to steal, managing an unlawful society and unlawful assembly as well as neglect to prevent felony.

The accused, however, denied all the charges.

The prosecutor, ASP Charles Odii, told the court that the accused committed the offences alongside other at large.

The chief magistrate, Mrs Adeola Adedayo, admitted each of the accused to bail in the sum of N100, 000 with two sureties each in like sum.