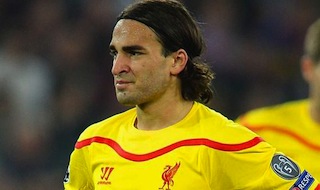 Liverpool’s Serbian winger Lazar Markovic has been given a four-match ban from European competition, UEFA confirmed on Tuesday.

The suspension follows his sending-off for a flailing arm at Behrang Safari in the Reds’ final Champions League group game against FC Basel in December.

Markovic was given an extra game on top of the normal three-match ban for violent conduct because he was sent off playing for Benfica in a Europa League match last May.

He had already been substituted in the Europa League semi-final against Juventus but was red-carded by English referee Mark Clattenburg for his part in a touchline fracas.

Liverpool failed to qualify for the knockout stage of the Champions League, instead dropping into the Europa League last 32, in which they will face Besiktas.

The first leg against the Turkish side will be at Anfield on Thursday.