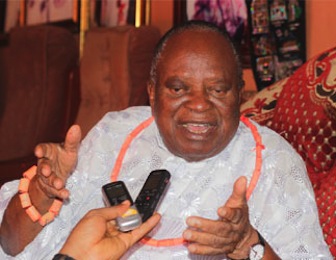 The Edo state government has uncovered the plan of some Peoples Democratic Party (PDP) leaders in Abuja to execute a Benin palace chief, leaders of the All Progressives Party (APC) and journalists in Edo state.

According to the state government the evil plot by anti-democratic forces to unleash a reign of terror on the state by way of high-profile killings ahead of the 28 March and 11 April general elections is to make the state ungovernable for Governor Adams Oshiomhole.

It would be recalled that there’s been a face off between the Esogban of Benin Kingdom, Chief David Edebiri and some members of Benin Forum. The Esogban came under severe criticism over a statement he made that the Benins will not vote President Goodluck Jonathan in the 28 March, 2015 presidential election, but will vote en-masse for candidate of the All Progressives Congress, APC, General Muhammadu Buhari (rtd).

Following the statement, members of the Benin Forum gave him a 12-hour ultimatum to resign his Chairmanship of the Forum.

The government in a press statement issued by the State Commissioner for Information and Orientation, Mr. Louis Odion, said, the “objective, we gathered, is not only to sow fear in the minds of the teeming supporters of All Progressives Congress (APC) but also make the state ungovernable for Comrade Adams Oshiomhole.

“The new evil agenda is akin to the one unleashed in 2012 ahead of the governorship election in which the Principal Private Secretary to the Comrade Governor, Comrade Olaitan Oyerinde, was brutally murdered. Till date, the killers are yet to be brought to justice.

“On the latest hit list are key figures in the administration, APC leaders, a vocal palace chief as well as journalists considered too independent-minded and unwilling to file fabricated stories to promote PDP.

“To achieve this, hard-boiled cultists, who were contracted to attack and vandalize the Edo House of Assembly quarters last year, have again been recruited and indeed given mobilization running into millions of naira and other logistics support from Abuja early this week through a local cleric-politician.

“The destabilization scheme is conceived, funded and directed by a group of PDP leaders based in Abuja alongside their underlings in Edo state in the cold calculation that once the teeming supporters of Comrade Oshiomhole were frightened away, PDP would then dominate the Edo space.

“The vocal palace chief being targeted, we gathered, is the Esogban of Bini Kingdom, Chief David Edebiri, who is also the leader of the influential Benin Forum. The PDP leaders were said to be uncomfortable with Chief Edebiri’s unrelenting criticism, the latest being a scathing interview in a national daily recently where he declared that Bini people would vote against President Jonathan in the coming election over what he described as the gross marginalization of people of Edo South in federal appointments and patronage in the last four years despite that the bulk of the 95 percent of the vote PDP received in Edo in 2011 came from the area.

To “prepare the grounds” against Chief Edebiri, it was further learnt, some renegades within Benin Forum have been recruited to publicly speak against him.

“At this juncture, we wish to inform the good people of Edo, particularly members and supporters of APC, to remain calm and law-abiding as the Comrade Governor has directed the security agencies to not only take preemptive steps but also investigate the matter and bring all those involved to book,” the statement concluded.