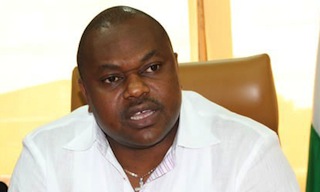 A former governorship candidate of the Peoples Democratic Party (PDP), in Delta state, Victor Ochei and other chieftains of the party, have been expelled from the party for defecting to other parties to realise their political ambition to contest the postponed general election.

Also expelled were Oharisi Ovie Omo-Agege, a former member of the House of Representatives, Mrs. Doris Uboh, Mrs. Ngozi Okolie and others.

Ochei who is the immediate past Speaker of the State House of Assembly, had defected to Accord Party and became its Delta north senatorial district candidate, while Omo-Agege, a former Secretary to the State Government, picked the Delta central senatorial ticket of the Labour Party.

Chairman of the party in the state, Chief Edwin Uzor, who announced the explosion of the defectors while addressing journalists in Asaba on Thursday, said the party has approved their expulsion.

“Any member of the PDP who left the party to contest against the party’s candidate has been expelled. We rose from a meeting this morning and their expulsion was approved. I am telling you this as the chairman of the party,” he said.

Uzor noted that the party issued an ultimatum to the erring members to retrace their steps or be sanctioned, but that the affected members never took the party’s warnings seriously.

According to him, no fewer than ten members of the party were suspended from the party for engaging in anti-party activities, adding that, several others were on the party’s watch list and the party will not hesitate to sanction them accordingly.

Commenting on the chances of the party in the forthcoming polls, Chief Uzor informed newsmen that the massive turn-outs during the party’s campaign rallies across the 25 local government areas of the state was an indication that victory was sure for the party in all the elections across the state.

He expressed satisfaction with the distribution of Permanent Voters’ Cards (PVCs) by the Independent National Electoral Commission (INEC), saying that about 1.8 million cards have so far been distributed out of the 2.2 million registered voters.

Chief Uzor therefore urged the electoral umpire to take measures to distribute the balance 400,000 cards to the owners in the state to enable the voters exercise their franchise on Election Day.