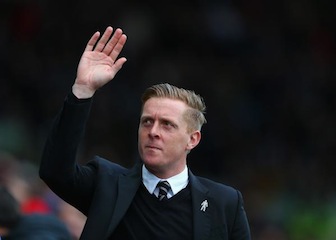 Build-up to the game was overshadowed by the fall-out from an incident in Paris on Tuesday in which a group of Chelsea fans prevented a black man from boarding a Metro train while chanting racist songs.

On their pre-scheduled ‘Equality Day’, Chelsea took an early lead through Branislav Ivanovic, but after Nemanja Matic had been sent off for lashing out at Ashley Barnes, Ben Mee headed in an 81st-minute equaliser.

Jose Mourinho’s side could see their lead trimmed to five points if City beat Newcastle United later on Saturday.

The Chelsea manager felt that his side should have been awarded four penalties, saying in a post-match interview: “There are four moment of the game where you can write the story: minutes 30, 33, 43 and 69.

“Don’t ask me more questions. I can’t go through the incidents. I am punished when I refer to these situations and I don’t want to be punished.”

Ivanovic struck in the 14th minute, finishing from six yards after Eden Hazard had weaved his way through a posse of defenders on the Chelsea right.

It was the Serbian defender’s sixth goal of the season and his second in two matches following his equalising header in the 1-1 draw against Paris Saint-Germain in mid-week.

But the tide began to turn in the 70th minute when Ivanovic’s countryman Matic was sent off for shoving Barnes to the ground after the Burnley midfielder caught him on the shin with an ugly challenge.

Eleven minutes later, the visitors claimed a scarcely hoped-for draw when Mee headed home Kieran Trippier’s left-wing corner at the back post to nudge Sean Dyche’s side closer to safety.

Meanwhile, Manchester United lost momentum in the battle for Champions League places after seeing a 19-game unbeaten run come to an end in a 2-1 defeat at Swansea City.

Ander Herrera celebrated his return to the starting XI by putting United ahead in the 28th minute after a sweeping move, only for Ki Sung-yueng to equalise almost immediately from Jonjo Shelvey’s cross.

The goal, credited to Gomis, allowed Swansea to complete a first ever home-and-away league double over United, following their 2-1 win at Old Trafford on the season’s opening weekend.

“Today we were the unlucky team,” said United manager Louis van Gaal. “I think we created enough chances. We were the dominant side in both halves.”

Arsenal capitalised on United’s slip-up with a 2-1 win at Crystal Palace that saw Arsene Wenger’s side climb to third place in the table. Both Arsenal’s goals bore hints of litigiousness, however.

Santi Cazorla opened the scoring in the eighth minute with a penalty awarded after Pape Souare was adjudged to have fouled Danny Welbeck in an incident that appeared to have occurred just outside the area.

Olivier Giroud added a second on the stroke of half-time, following up after Julian Speroni had saved from Welbeck, but the England forward looked to have been offside in the build-up.

Glenn Murray tapped in a stoppage-time consolation for Palace.

United are also under threat from fifth-place Southampton, who will knock Van Gaal’s side out of the Champions League places if they avoid defeat at home to Liverpool on Sunday.

Elsewhere, Tim Sherwood’s tenure as Aston Villa manager began with a cruel 2-1 loss at home to Stoke City that saw his new side slip below Burnley to second-bottom.

Scott Sinclair headed Villa in front in the 20th minute, but Mame Biram Diouf equalised and Victor Moses gave Stoke victory with a stoppage-time penalty after Ron Vlaar was dismissed for felling Diouf.

Nikica Jelavic volleyed Hull ahead and although Charlie Austin headed in a 39th-minute equaliser shortly after Barton had been given his marching orders, Dame N’Doye gave Hull victory with an 89th-minute header.

In the day’s other game, Sunderland and West Bromwich Albion played out a drab 0-0 draw at the Stadium of Light.