Game On! Mayweather to fight Pacquiao on May 2 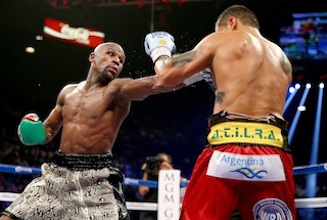 Mayweather throws a left to the face of Maidana

Filipino boxing icon Manny Pacquiao will meet Floyd Mayweather in Las Vegas on May 2 in the mega-fight more than five years in the making.

Unbeaten American Mayweather made the long-awaited announcement on Friday via the social media website Shots.com, ending weeks of increasingly intense speculation that the showdown had been set.

“What the world has been waiting for has arrived. Mayweather vs. Pacquiao on May 2, 2015, is a done deal,” Mayweather wrote.

“I promised the fans we would get this done, and we did,” he added, posting a picture of a signed contract.

Eight-division world champion Pacquiao dedicated the fight at the MGM Grand Garden Arena to fans who “willed” it into being.

“I am very happy that Floyd Mayweather and I can give the fans the fight they have wanted for so many years,” said Pacquiao, who also posted a picture of the contract on Twitter.

“They have waited long enough and they deserve it.”

The welterweight world title showdown — Mayweather owns the World Boxing Council title and Pacquiao the World Boxing Organization crown — is sure to be the most lucrative in boxing history, generating massive pay-per-view revenue.

More importantly for fans, it will finally pit the two boxers long considered the best “pound-for-pound” fighters of their generation against each other.

Previous bids to put together a fight between the two — most notably in late 2009 — had run aground over various issues, including division of the purse and a drug testing protocol.

Animosity between Mayweather’s camp and Pacquiao’s promoter Bob Arum has also been a stumbling block.

Filipino southpaw Pacquiao, 57-5 with two drawn and 38 knockouts, has won three fights in a row since being knocked out by Juan Manuel Marquez in his fourth bout against the Mexican.

“Pac-Man,” who is 36, won a unanimous decision over Chris Aligieri in Macao last November in his most recent fight.

Mayweather, 47-0 with 26 knockouts, turns 38 on Tuesday and has two more fights in the Showtime deal that has made him the highest-paid athlete in the world.

Mayweather is homing in on the iconic 49-0 record of 1950s legend Rocky Marciano, who retired as an undefeated heavyweight champion.

Mayweather is coming off a unanimous decision over Argentine fighter Marcos Maidana last September in a rematch of a bout that Mayweather won by majority decision.

Both fighters said after their most recent victories that their showdown should happen.

In January, the two met unexpectedly at a Miami Heat NBA game and arranged a meeting at which discussions apparently got serious.

Pacquiao said last week he had agreed to the drug-testing procedures Mayweather wanted as well as other demands, and he believed an announcement of the fight was imminent.

A British newspaper reported last Sunday that Pacquiao had signed a contract and Mayweather was poised to announce the bout, possibly at the NBA All-Star Game in New York.

But in his brief courtside interview from the game, Mayweather denied the deal was done, leaving oft-disappointed fans to wonder if negotiations had stalled again.

As recently as Thursday, Arum said he “knew nothing” about the state of negotiations.

US media reported that Mayweather will garner 60 percent of the ultimate purse and will make in the region of $120 million while Pacquiao will make $80 million.

Because each fighter is contracted to a different US telecaster, contracts also had to be signed by rivals Showtime and HBO, who will team for an historic joint pay-per-view.

It is the second time Showtime and HBO have made such a deal. In 2002 they teamed for the fight between then-heavyweight champion Lennox Lewis, who was with HBO, and former champion Mike Tyson, who was with Showtime.

Not surprisingly, the trash talking was already underway.

“Floyd should enjoy being the A-side while he can,” Pacquiao’s trainer Freddie Roach said. “Because on May 2, Manny is going to put him on his backside.”

Mayweather was having none of it.

“Manny is going to try to do what 47 before him failed to do, but he won’t be successful,” Mayweather said. “He will be number 48.”