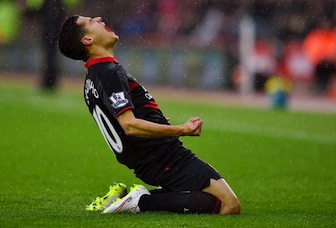 Philippe Coutinho scored a magnificent goal as Liverpool overcame Southampton 2-0 in a controversial game on Sunday to close to within two points of the Premier League’s top four.

Coutinho opened the scoring with a stunning 30-yard effort in the third minute and Raheem Sterling added a second goal towards the end, but it was the performance of referee Kevin Friend that was to prove the biggest talking point on a cold, squally evening at St Mary’s.

The official turned down two strong penalty appeals from Southampton and was barracked by their supporters throughout, as Ronald Koeman’s side went a third home game without finding the net.

The result prevented Southampton from overtaking fourth-place Manchester United, who they trail by a point, and Liverpool are now just a point further back after extending their unbeaten run to 10 league games.

Brendan Rodgers’s in-form side are now within touching distance of the Champions League berths ahead of a pivotal week that sees them take a 1-0 lead to Besiktas in the Europa League before welcoming champions Manchester City to Anfield next weekend.

Dejan Lovren, who replaced the injured Mamadou Sakho, and former Southampton captain Adam Lallana were both booed on their returns to St Mary’s, but Coutinho sliced through the home fans’ jeers with a sensational early goal.

Collecting the ball 30 yards from goal, the Brazilian midfielder shifted it onto his right foot and let fly with a glorious, dipping shot towards the top-left corner that cannoned into the net via the crossbar.

By then, Filip Djuricic, making his first Southampton start, had already had a penalty appeal turned down when he went down after getting goal-side of Emre Can, and he then saw an even stronger claim waved away.

He was sent sprawling by a sliding challenge from Joe Allen, but Friend allowed play to continue and Liverpool goalkeeper Simon Mignolet had to block from Eljero Elia.

The official further angered the home support when he failed to penalise Can for up-ending Nathaniel Clyne on the Southampton right, but he also allowed Jose Fonte to get away with a full-blooded sliding block on Sterling inside the hosts’ area.

There were also roars of disapproval when Mignolet raced from his box to repel an attempted lob from Elia, but replays showed the ball had struck the goalkeeper’s chest and then ricocheted against his arm.

Moments before half-time, amid pandaemonium in the Liverpool box, Mignolet parried from Djuricic.

Both sides made changes at the break, Southampton sending on the fit-again Morgan Schneiderlin and Liverpool introducing Alberto Moreno for Lazar Markovic, while Sadio Mane entered the fray for the hosts shortly after.

Graziano Pelle dragged wide and Martin Skrtel produced a good block to thwart Mane as Southampton pushed for an equaliser, but with 17 minutes to play, Liverpool’s killer second arrived.

Slipping on the greasy pitch, Matt Targett could only steer Moreno’s left-wing cross as far as Sterling, who slammed home before celebrating jubilantly with the fans behind Fraser Forster’s goal.

It was Sterling’s third goal in five games and validated Rodgers’s decision to select the England forward instead of Mario Balotelli, who remained on the bench.

Thereafter, Mignolet saved a skidding free-kick from substitute Dusan Tadic and an overhead kick from Schneiderlin, but the game was already up.