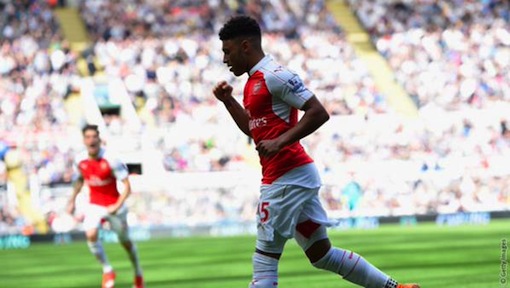 (Reuters) – Arsenal laboured to their second win of the season with a highly-charged 1-0 victory against 10-man Newcastle United at St James’ Park on Saturday.

In a match that also featured seven yellow cards Arsenal dominated possession but were far from their dazzling attacking best and have only scored three goals, including two own-goals, in four games this season.

“You always want more goalscorers but I believe that at the moment we have not fired on all cylinders offensively,” manager Arsene Wenger told BT Sport.

“Our finishing has maybe not been absolutely clinical and we have to focus on that. Of course I was (nervous) but we were always on top.”

Arsenal had begun the season in indifferent form taking just four points from their opening three matches but started strongly and had an early penalty appeal turned down for a foul on Hector Bellerin.

Having failed to win any of their previous eight home Premier League matches against the Gunners, Newcastle had Mitrovic dismissed for a mistimed yet unmalicious challenge on Francis Coquelin.

Mitrovic had also been booked twice in his first three league games.

With a man advantage Arsenal dominated possession but struggled to break down the hosts’ resolute defence.

After Theo Walcott put a shot wide with the goal at his mercy Aaron Ramsey had an effort blocked before Walcott failed to connect with Bellerin’s teasing cross.

Wenger cut a frustrated figure before halftime but his discontent was eased when Oxlade-Chamberlain lashed a shot into the heel of Coloccini and beyond stranded Newcastle goalkeeper Tim Krul.

Walcott had started in his favoured central forward position but was relatively ineffective before being substituted in the 70th minute.

His replacement Olivier Giroud provided a more direct focus of attack but he blazed high and wide from a tight angle — one of 21 shots Arsenal mustered during the game.

Arsenal sit in fifth place with seven points while Newcastle are yet to win this season and lie 17th on two points.