Chiefs not qualified to be crowned Ooni, says group 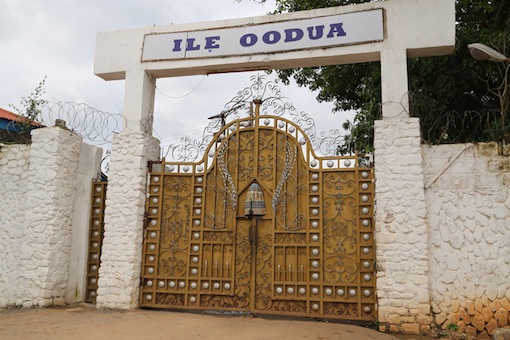 'Ile Oodua' will remain shut according to tradition until the next Ooni of Ife is named
Photo: Idowu Ogunleye

The co-ordinator of the Ile-Ife-based group, Mr. Kunle Elusayo, said this in a statement issued in Ile-Ife and made available to journalists.

According to him, it is an abomination to offer and receive any chieftaincy title regardless of the prestige and ovation associated with such title because you are a prospective king.

He explained that being a prince places above any chieftaincy title and such cannot be compromised.

He specifically stated that only those who are not princes are given chieftaincy title and made chiefs and such people don’t qualify to be crowned Ooni of Ife.

Elusayo said: “‎Princes are never conferred with Chieftaincy tit‎les. Once a prince always a prince. This is a popular Yoruba custom and adage. It is therefore odd to see chiefs coming out to say they want to be Ooni, which is impossible. Their declaration of intention is in the first place an embarrassment to our tradition. It is an abuse on our collective intelligence.

“We fully trust the King makers but we sincerely call their attention to these stated facts. In most cases, Chieftaincy titles were conferred on people of integrity, prominence and charisma to honour them, if they are not princes of the town in Ife. This is the singular reason why no prince is is a chief. If not for this, kingship would have also given all his children (son) chiefs.”

The group also referred to a statement made by the late Ooni Oba Sijuwade Okunade on an outstanding indigene of Ile-Ife to back its claim.

The late Oba Okunade was quoted to have made the statement in a book titled, ‘The Untold Story of ‎a Great Achiever’ written by Idowu Aloba on the biography of Dr. Adegoke Adedoyin.

The late Oba Sijuwade was quoted as saying that “His (Adedoyin) leadership quality, exemplary life, dedicated life of service to humanity were all that earned h‎im the Chieftaincy title, ‘Maye of Ife’. And since he was made the Maye, he has been up and doing. He is a true ambassador of the Source. I address him as my dearest son.”

The group leader added that the claim that every Ooni before their death usually pointed to the person who will come as Ooni after him was “a total falsehood and fraudulent”.

Elusayo added, “Our attention has been drawn to the interview and media misinformation that the late revered Oba Sijuwade Okunade had anointed a person to be the next Ooni before his death.‎ It is however, necessary to caution any contender to stop dragging the revered name of the late Oba Sijuwade into disrepute, as the late Ooni Oba Sijuwade Okunade II was well tutored and versed in tradition ‎that he will never attempt to usurp the duties of the Ife Kingmakers. Moreso, that this does not lie in his purview.

“To put the records straight, the general public and Ife Sons and Daughters, both at home and in the Diaspora need to be informed rightly. In the declaration made under section 4 (2) of the Chief Law 1957 of the Customary Law regulating the selection of the Ooni of Ife, there are four ruling Houses, which have the right to provide candidates for the Ooni Cheiftancy and the identity of each of such ruling houses is as follows: Oshinkola, Ogbooru, Giesi and Lafogido.

“From the above, it is clear there exists no ruling House known or identified as Agbedegbede/Osinkola Akui ruling house.”

Based on the controversy surrounding the public statement by Chief Adedoyin, the leader of the Ile-Ife-based group said: “Truth be told that his paternity has been traced to the late Alhaji Saka Adedoyin, who hails from Lukoun-Oba-Laaye ruling house and his paternal grand mother from Adogbodo-Obalufe ruling House.

“From the foregoing, it is clear that Chief Dr. Adedoyin is only qualified to be an outer Chief either as the Obalaaye of Iraye (Ife) or the Obalufe of Iremo (Ife) and not the Ooni of Ife. This has been confirmed by Dr. Adedoyin himself in his biography contained in the above stated book.”