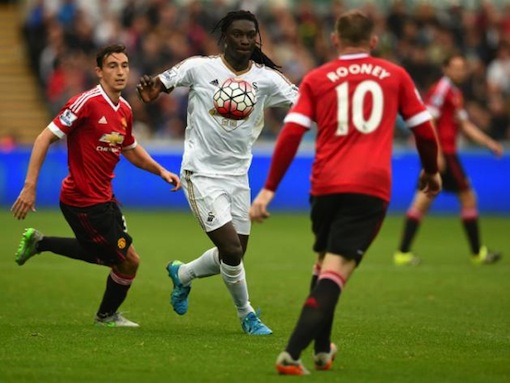 United went ahead through Juan Mata early in the second half at the Liberty Stadium, but Andre Ayew equalised in the 61st minute and then set up Bafetimbi Gomis for the winner five minutes later.

Van Gaal had lost 2-1 at home to Swansea in his first game as United manager last season and having also seen his team go down by the same scoreline in the return fixture, he was given more reason to curse Garry Monk’s side on the occasion of his 50th game in English football.

“The opponent changed their shape and we could not cope. That is not good,” the United manager told Sky Sports.

“We lost in that five minutes and it is a pity because we controlled the game. You have to be compact. We were probably too dominant to have the sense to do that.”

Swansea climbed to fourth place in the table, a point above United and four below early leaders Manchester City, having started a top-flight campaign with four unbeaten games for the first time in their history.

“We enjoyed that,” said Monk. “In the first 20 minutes United started really well, but second half we were magnificent.

“The players were so brave today and we were clinical when we needed to be. We went to a diamond (formation) in the second half and that helped us. We are a force in this league.”

With Morgan Schneiderlin and Bastian Schweinsteiger restored to the team after starting Wednesday’s 4-0 Champions League play-off win over Club Brugge on the bench, United started purposefully, but Swansea enjoyed a purple patch mid-way through the first half.

Gomis sliced off target, Gylfi Sigurdsson shot inches wide from Jonjo Shelvey’s cleverly disguised free-kick and Gomis then prodded a shot against the post after wriggling into the box from the right.

They were encouraging signs for a team bereft of the livewire Jefferson Montero due to injury, but three minutes into the second half Swansea fell behind.
Luke Shaw was given space to motor down the United left and after his cross passed between Wayne Rooney and Neil Taylor at the near post, Mata ghosted in behind Swansea captain Ashley Williams to slam home.