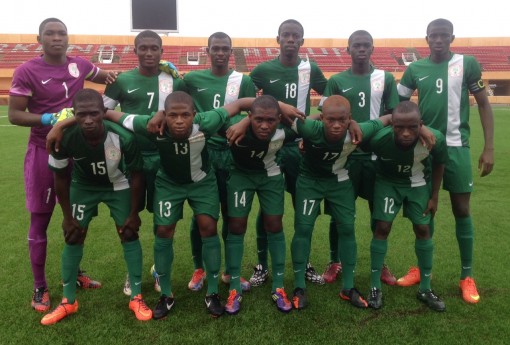 Nigeria’s U-17 team, Golden Eaglets on Friday beat the Junior Selecao of Brazil 2-1 at the on-going Suwon Continental Cup International Youth (U-17) Football Tournament in Korea.

Kingsley Michael and Chukwudi Agor scored two first half goals while David Enogela conceded a second half own goal.

With the victory, the Eaglets shot their way to the top of the table of the 4-Nation Tournament with four points following their 1-1 draw on Wednesday against South Korea.

Nigeria went into the lead through Michael in the 20th minute when he delicately placed the ball behind Juliano after the burly goalkeeper re-bounced Victor Osimhen’s powerful shot.

Twelve minutes later, Osimhen again laid the ball on the path of Chukwudi Agor who shot from acute angle to score his first goal in national team colours.

The Brazilians swooped on the Eaglets in the second half and Evander saw his shot ricocheted off the bar in the 54th minute and goalkeeper Udoh Akpan was at his best to punch away Vitinho’s volley in the 60th minute.

Meanwhile, Nigeria’s Head of Mission to the Republic of South Korea, Mr. Sheidu Omeiza Momoh has told the Golden Eaglets to go to Chile and conquer the world again.

Ikpeme reiterated that the Eaglets are proud record four-time champions at the FIFA U-17 World Cup level including 2007 victory in South Korea and were at the 2015 Suwon Tournament to prepare ahead of the rigorous challenge expected in Chile.

Momoh in his remark enjoined the Golden Eaglets to follow on the illustrious path of their predecessors that conquered the world in 1985, 1993, 2007 and 2013, adding that they stand on the threshold of history if they can go all the way in Chile.

“You are our soldiers on the field and it is now your time to go and do the country proud,”said Momoh, a career diplomat with over three decades experience.

“I want you to remember that you are representing the country and you must be good ambassadors by representing us very well here in Suwon and at the FIFA U-17 World Cup in Chile.”