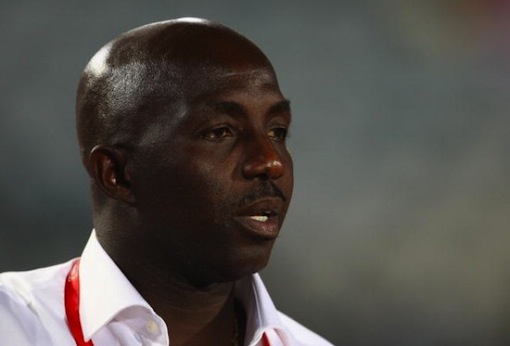 Samson Siasia, Chief Coach of the Dream Team VI has expressed dissatisfaction over his team’s 1-1 draw with Senegal in the last Group B men’s football event at ongoing All Africa Games (AAG) in Congo Brazzaville.
A statement issued on Saturday from Segun Ogunjimi, Siasia’s media aide, quoted Siasia saying he was not satisfied with the performance of his players against Senegal, in spite topping the group.
“I am not totally a happy man in spite qualifying for the semi-finals of the games football event.
“As usual, we played well; we created chances but failed to convert them.
“We have been having this problem before we left Nigeria and we have been working hard to improve our scoring rate but we won’t get tired until we achieve success,’’ Siasia said.
Siasia commended the Senegalese team which converted one out of the two chances it had in the game.
He regretted that his team had several chances but were only able to convert one.
The News Agency of Nigeria (NAN) reports that the Senegalese were coasting home to victory to the top of the group with Ibrahima Keita’s 81st minute goal.
The Dream Team VI however, fought back and snatched a late equaliser four minutes into added time to emerge as Group B leaders in the football event.
The Siasia tutored side had qualified for the semi-finals on Wednesday following a 2-0 victory over Ghana and Egypt’s withdrawal from the football event but needed the 1-1 draw against Senegal to top the group.