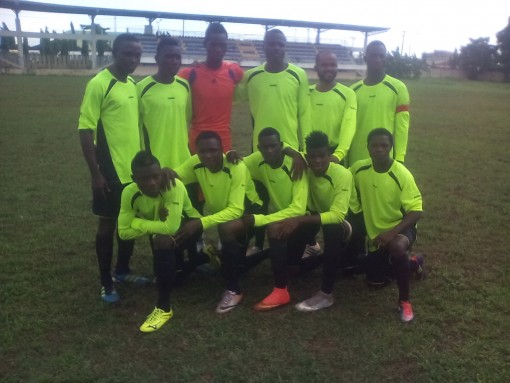 The premises of NITEL Training School at Cappa, Oshodi in Lagos has been a beehive of activities since the kick off of the maiden Mimshack Sports Mock Nations Cup on 12 October.

P.M.NEWS Sports observed that the tournament has also generated a lot of excitement among fans and young players with the competition reaching its quarter final stage Thursday.

Speaking on the vision behind the grassroots football competition where the participating 16 teams bear the names of some African countries, sponsor, Barrister (Mrs.) Rotimi Alfred said that “every Nigerian must see it as a point of duty to be part of nation building through youth empowering projects, and I believe the government cannot do it alone. We need concerted efforts from all Nigerians to develop the talent of our youth and take many of them out of the streets.

“Sponsoring a tournament like this is my own little way of telling our youth that there’s hope. I believe that if you build life, you are building a generation.”

Barrister Alfred disclosed that 48 matches (three matches per team) were played with 47 goals scored in the preliminary stage.

According to her, N100,000 with a giant gold trophy will be given to the winners of the competition in the final slated for 31 October.

The second and third runners up will get N70,000 and N50,000 respectively with medals, while awards will also be given to the highest goalscorer, most valuable player and the best goalkeeper of the tournament.

A member of the organising committee, Coach Adewale Adams, said that the sponsor has indicated her interest in taking the competition to the next level in the next edition with the introduction of female competition.

“We would like more sponsors to come on board to add more packages as rewards for the players because we plan to introduce other sports such as table tennis and athletics in the future,” Coach Adams said.

In the semi final matches which will be played on Monday, Oct. 26, DR Congo will trade tackles with Senegal, while Tunisia will lock horns with Togo.