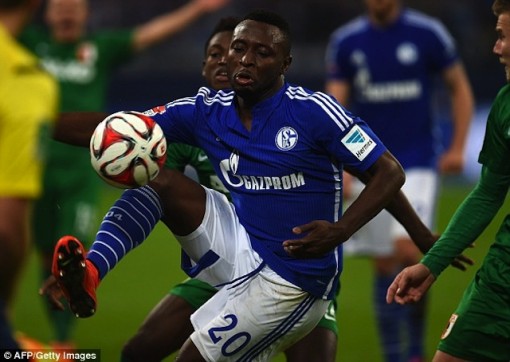 Chinedu Obasi in action for Schalke

Sunderland are giving a trial to former Schalke striker Chinedu Obasi who is a free agent.

The 29-year-old is available on a free after his contract with the German club ran out in the summer.

However, the Nigerian international had been sidelined with a bad injury and has only just returned to fitness.

Sunderland is short of goals and Black Cats boss Sam Allardyce hopes Obasi can help should he prove his fitness over the next two weeks.

“There’s a triallist in at the moment. He used to play for Schalke but he’s been injured,” Allardyce said of the forward.

“He’s a Nigerian international and we are just seeing because he’s got a reasonably good CV, in terms of where he’s played before.

“He has been fraught with a bad injury, which is why he’s not been fixed up with a club yet, but we’d like to see him for this week and perhaps next week.

“But I need someone who has an impact now, not in three weeks time, so it will be a difficult task I think. But he’s here and if he can show us anything we haven’t got then there maybe something we can do.”

In his three years with Schalke, Obasi scored just four goals in 34 games in all competitions.

Sunderland are to begin talks with Duncan Watmore over a new contract, with the 21-year-old’s current deal set to expire at the end of the season.