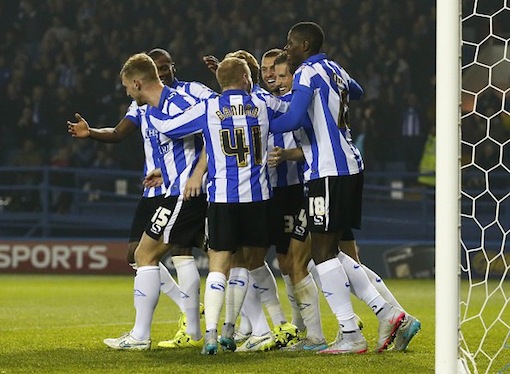 In-form Arsenal were dumped out of the League Cup after a weakened team crashed to a damaging 3-0 defeat at second-tier Sheffield Wednesday in the fourth round on Tuesday.

Showing eight changes, Arsene Wenger’s team were well beaten by Championship side Wednesday at Hillsborough and also lost Alex Oxlade-Chamberlain and Theo Walcott to injury in the first half.

Ross Wallace put Wednesday ahead after 27 minutes and then teed up Lucas Joao for the hosts’ second goal shortly before half-time, with Sam Hutchinson completing victory early in the second period.

Asked how his young fringe players had handled the occasion, Wenger delivered a scathing assessment, telling Sky Sports: “It was too high for them. They are not ready to play at this level, none of them.”

On the injuries his team suffered, he added: “We are short now because we lose Chamberlain today, we lose Walcott and we have already a few injuries.

“It is a big blow for us, of course to lose the game, but even more for the other competitions, which are very important for us, to lose two players of that stature.”

It was Wednesday’s second Premier League scalp in this season’s competition, following their third-round win at Newcastle United, and brought Arsenal’s run of four successive victories to an end.

Bidding to bounce back from Saturday’s 2-1 defeat at West Ham United and ease the pressure on beleaguered manager Jose Mourinho, Chelsea fell behind to Jon Walters’s fine 52nd-minute strike at the Britannia Stadium.

But in the first minute of stoppage time, Remy lashed Kurt Zouma’s flick-on into the roof of the net to keep the holders in the competition.

Wenger made eight changes to the team that beat Everton 2-1 on Saturday for the trip to Hillsborough, which was a repeat of the 1993 final.

Oxlade-Chamberlain was one of only three players who kept their places, along with Petr Cech and Olivier Giroud, but he went off in the fifth minute after pulling up while running along the touchline.

Walcott replaced his England team-mate, but he in turn was forced off 13 minutes later with an apparent calf injury.

Wednesday took the lead nine minutes later when a neat move down their left flank culminated in Daniel Pudil cutting the ball back for Wallace to steer a first-time shot inside the left-hand post.

Wallace teed up Wednesday’s goal in the 40th minute after a short corner, swinging over a cross from the left for striker Joao to head home.

Wednesday completed victory six minutes into the second half when Barry Bannan’s free-kick found Tom Lees in acres of space at the back post and he volleyed across goal for Hutchinson to score with his knees.