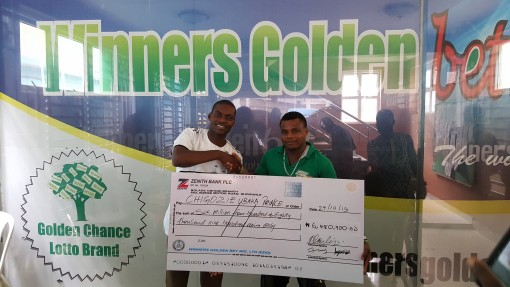 General Manager of Winners Golden Bet, Mr. Ayodele Salami (left) presents a cheque of N6,480,900 to Chigozie Ubaka Prince after winning on the coupon of the company

A seller of building materials, Chigozie Ubaka Prince, has won the sum of N6,480,900 on the coupon of Winners Golden Bet.

Ubaka, who hails from Abia State, said though he had been playing the sports betting game for long, he switched to Winners Golden Bet in April this year.

He said that his commitment to the company put smile on his face last weekend.

“I selected 12 straight wins from international friendlies, championship and the Premier League. From the onset, my instincts told me that I would win from this particular set.

“When the game was about two matches left, I knew I will win because the last two games were between Arsenal and Everton on one side and PSG and St. Etienne on the other. At this point I knew it was just a matter of time,” Ubaka narrated when he was presented with the cheque of N6m by the General Manager of Winners Golden Bet, Mr. Ayodele Sajimi in Lagos.

Ubaka said he was glad when his ticket was declared winner. “I was very happy, I just said thank you Jesus.”

On how he wants to spend his largesse, he disclosed that he will invest in his building materials business.

“I’m a building material merchant and I intend to invest more in this business. I am surprised with the prompt payment of my winning. I can’t believe it when I received the alert that my account has been credited with N6m. I did not expect to be paid so fast,” Ubaka said.

General Manager Sajimi reiterated Winners Golden Bet’s commitment to prompt payment of winnings, adding that the leading sports betting company in Nigeria places high premium on the importance its customers to the survival of the business.